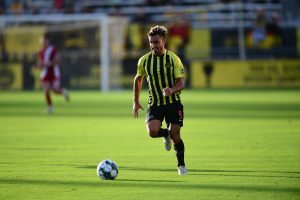 The Battery secured their second home victory of the season with a 3-0 win over Loudoun United FC. It was a night of seconds as the Battery saw their second clean sheet of the season, second win at Patriots Point, second win over Loudoun United FC and a second professional brace by Nicque Daley. Stavros Zarokostas got the scoring started in the 16th minute with a strike off the post that went in, and Daley notched the brace to put the game away. Zarokostas’ goal was particularly of note, as it was the 10,000th regular-season goal in USL Championship history.

Loudoun threatened early with three shots in the first 10 minutes of the match, but none converted. Charleston, however, struck first in the 16th minute when Stavros Zarokostas drove a shot past goalkeeper Jermaine Fordah’s reach, off the left post and into the net. Logan Gdula assisted Zarokostas’ goal.

The Battery and Loudoun continued to trade attacking possessions into the half-hour mark, but neither side could find a goal. Nicque Daley doubled Charleston’s lead in the 35th minute from inside the box. Daley fielded a cross from Zarokostas in the middle of the box and took the shot, but was quickly blocked by a Loudoun defender. Daley recovered the ball and turned past the defender to put a second shot past Fordah into the bottom left corner of the net. The Battery defensive unit frustrated the Loudoud attack through the remainder of the half, including a pair of solid saves by Battery keeper Joe Kuzminsky, to preserve the 2-0 lead.

The Battery applied pressure early in the second half with shots from Gdula, Zarokostas and Daley within the first 12 minutes of the half. The pressure proved fortuitous in the 60th minute when a flurry of saved shots off the boots of Robbie Crawford and Joel Bunting gave way to Nicque Daley to score his second of the night. Daley pounced on the rebound from Bunting’s shot and worked through the Loudoun defense to send the Battery ahead three-nil.

Loudoun continued to fight in the second half with a handful of shots following Daley’s brace. Robert Dambrot, Darlius Paz, Jovanny Bolivar, Abdellatif Aboukoura and Timothy Mehl all had shots in the ensuing 15 minutes. The Battery defense stayed strong despite Loudoun’s efforts to secure their second clean sheet of the season.

RiverDogs Take a Bit out of the GreenJackets on Toilet Paper Night, 9-1