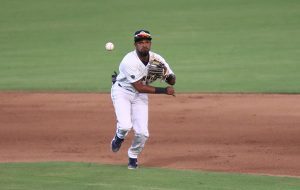 The Charleston RiverDogs were held without a hit until the fifth inning in a 7-2 loss to the Augusta GreenJackets at Joseph P. Riley, Jr. Park on Thursday night. Augusta scored in each of the first three innings to pick up their first win of the series. The game was played in front of a season-high 5,562 fans.

The GreenJackets (20-24) took the lead immediately as Cade Bunnell homered on the second pitch of the game to give Augusta a 1-0 lead. In the second inning the RiverDogs cut down a runner at home plate on a perfectly executed relay, but couldn’t keep the GreenJackets off the board as Braulio Vasquez lined an RBI single to right field. A Willie Carter single in the third inning drove in another run to make it 3-0.

Augusta widened the gap considerably with a three-run sixth inning and eventually built the lead as large as 7-0 with a solo home run from Vasquez in the seventh.

The RiverDogs (28-15) recorded their first hit on a Johan Lopez single with two outs in the fifth inning. It was the lone hit that Augusta starter Tanner Gordon allowed in 6.0 scoreless innings of work. Charleston was held scoreless until the last of the eighth inning when Curtis Mead drove in a pair with his league-leading 16th double of the season. Mead, now with 26 runs batted in, took over the team lead and moved into a tie for fifth in the Low-A East in RBI.

Bradley was saddled with the loss, giving up three runs, two earned, on five hits. Neraldo Catalina allowed three runs in his lone inning of work as the first man out of the bullpen. Addison Moss surrendered one run in 1.2 innings and Steffon Moore worked 1.1 scoreless innings with three strikeouts.

Ballpark Fun
The largest crowd of the season was treated to the return of Thirsty Thursday staple, DJ Natty Heavy to The Joe. He entertained fans enjoying $1 beers on the Ashley View Pub all night long. After going without a DJ on Thursday nights early in the season because of COVID protocols, the RiverDogs plan to have DJ Natty Heavy at each Thursday contest for the remainder of the season.

The series continues on Friday night with game four. The RiverDogs will have RHP Matthew Peguero (0-0, 3.38) on the mound to open the contest. Augusta will call on RHP Jared Johnson (0-2, 6.35). The game will be followed by fireworks presented by REV Federal Credit Union.

Battery Fall on the Road in 3-0 Loss to Charlotte