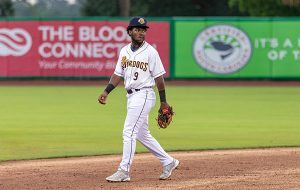 The Charleston RiverDogs emerged with a 5-3 victory in a sloppy struggle with the Augusta GreenJackets in front of 4,005 fans on Wednesday night at Joseph P. Riley, Jr. Park. The teams combined to commit nine errors in the contest with the RiverDogs responsible for a season-high five. Three runs in the bottom of the eighth inning helped the RiverDogs break a late tie.

The decisive inning began with the score tied 2-2. Diego Infante hit a sinking line drive to center field that evaded the diving attempt of Stephen Paolini and rolled all the way to the wall for a leadoff triple. In the ensuing at bat, Alexander Ovalles was able to turn on an 0-1 pitch on the inner part of the plate and hook an RBI double down the right field line to drive in the wgo-ahead run. Later in the inning, following a walk drawn by Jonathan Embry, Garrett Hiott collected his first runs batted in with the team by lacing a two-run single up the middle.

The game began slowly for both offenses with neither team able to break through in the first three innings. In the fourth, each side was able to scratch across one run thanks to some help from the opposing defense. Augusta grabbed the lead in the top of the inning in a rally that began with a Willie Carter single to center. Carter moved into scoring position with a stolen base and then scored on a Victor De Hoyos double to right field that was misjudged by outfielder Diego Infante.

In the home half of the frame, Infante worked a leadoff walk and raced to third on an Ovalles double that placed two in scoring position. In the next at bat, an Osleivis Basabe groundball led to a wild sequence that ended with a 1-1 tie. Basabe’s bouncer to third baseman Vaughn Grissom initially resulted in Infante being thrown out at the plate. The catcher De Hoyos also tried to throw out Ovalles as he raced into third, but the ball bounced away and the runner raced home with the tying run.

The RiverDogs were able to break open the 1-1 tie in the seventh inning by taking advantage of more defensive miscues from the GreenJackets. Abiezel Ramirez reached base to start the stanza on an error by shortstop Cam Shepherd. He raced to third when Jonathan Embry singled to center and the bouncing ball was misplayed by center fielder Paolini for another error. A sacrifice fly from Heriberto Hernandez would plate Ramirez and put the RiverDogs in front 2-1.

The lead was short-lived as Grissom drove an opposite field solo home run over the wall in right center to even the score in the top of the eighth.

Starting pitcher Seth Johnson continued his stellar work of late with 5.0 strong innings in which he allowed just one run on three hits while striking out eight. Luis Moncada, the winning pitcher, followed out of the bullpen with 3.0 innings of work during which he also allowed one run. Angel Felipe picked up his second save by working the ninth inning, allowing one run in the process.

Ovalles went 2-4 with an RBI to pace the RiverDogs seven-hit attack. Augusta finished the contest with just four hits.

Ballpark Fun
The RiverDogs dedicated the night to celebrating educators from the Charleston area who have been invaluable to their students during a challenging year. On Teacher Appreciation Night, teachers were offered discounted tickets for some of the best seats in the ballpark. A large portion of the 4,000 attendees were educators and their students, some of which were featured in between-innings contests.

The RiverDogs will look for a third straight win in the series on Thursday night with a 7:05 p.m. first pitch. RHP Taj Bradley (4-2, 2.73) will start on the mound for the RiverDogs in a battle with Augusta RHP Tanner Gordon (0-4, 6.14). On Budweiser Thirsty Thursday, $1 beers will be available throughout the ballpark and DJ Natty Heavy makes his return!

Battery Fall on the Road in 3-0 Loss to Charlotte