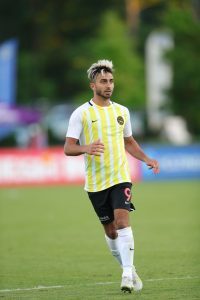 MATTHEWS, N.C. – The night was not in the Battery’s favor as the Black and Yellow fell 3-0 Wednesday on the road against Charlotte Independence. It marks the first time the Battery have dropped consecutive matches to the Independence. The Battery created solid chances throughout the match with a season-high 16 shots on the evening, but were unable to find the back of the net. Charlotte took advantage of an early lead, holding the Battery scoreless while adding points on the board converting a penalty kick in the second half and a late goal in stoppage time.

After a slower start, the Battery, sporting a 3-5-2 formation for the second time this season, adjusted quickly after Independence forward Dane Kelly took a shot from the top of the box in the 6th minute to put the Jacks up by one. From the 15th minute onward, the Battery had strong showings controlling the ball and putting pressure on the Charlotte defense. The Black and Yellow produced seven shots through the first 45’, with 3 requiring hard efforts from Charlotte keeper Brandon Miller to keep it out of the net.

The chances came early for the Battery as Stavros Zarokostas pushed a through ball off an AJ Paterson throw-in that was deflected forward by Angelo Kelly. Stavros settled the ball inside the box in the 30th minute and took a shot from a tight angle, curling just over the crossbar. Riding on strong defensive support holding back the Independence, Charleston would get another chance in the 44th minute as a Robbie Crawford fielded a deflection of the cross for a shot on goal barely scooped up by the opposing keeper Miller. The Black and Yellow headed to the locker room at half with momentum in their favor.

The Battery came out in the second half showing dynamic passing and purpose in every possession. A halftime change that brought in Ben Di Rosa for Erik McCue added some fresh legs for the second-half push and the Battery saw some early chances again. Robbie Crawford had the best looking chance of the evening in the 61st after a cutback cross by Zarokostas found the Scotsman at the top of the box for a low-rolling, but powerful shot going just wide. Crawford would lead a wave of attacks just minutes later that met continued deflections in the box by the Charlotte defense.

Charlotte took control midway through the second half to build on their 1-0 lead. Turning the tables, Charlotte’s attack in the 70’ and beyond wore down the Battery defense. A sliding block by Leland Archer in the box got called for a handball, giving the Independence the penalty kick opportunity that Marcelo Palomino converted to build on Charlotte’s lead and make it 2-0. As the Battery sought chances in the waning minutes, the Independence broke through the midfield in stoppage time as Dane Kelly pulled back his shot, centering it to Valentin Sabella who punched it through for the final goal before the whistle.