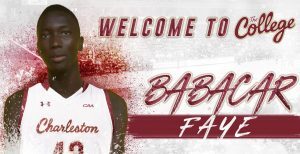 Babacar Faye (Saly, Senagal) has signed a National Letter of Intent to attend the College of Charleston and join the men’s basketball program in the fall of 2021 announced head coach Pat Kelsey on Tuesday.

“Babacar is an elite athlete with great size and length,” Coach Kelsey said. “His training at the NBA Global Academy in Africa the last two years has allowed him to blossom, especially the versatility in his game. To think he just began playing organized basketball a few years ago and to see what he has become today is scary. You watch his video and you say, ‘wow.’ He’s going to get better and better because of his approach and mindset. He’s a great kid.”

Faye comes to the College from NBA Academy Africa in Senegal where he averaged 18 points, eight rebounds, and three steals per game during the 2020-21 season. Faye was selected to participate in the 2020 NBA Basketball Without Borders Global Camp held at NBA All-Star Weekend in Chicago, which featured the top international-born teenagers as selected by the NBA and FIBA.