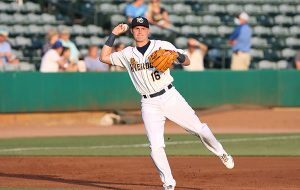 Charleston RiverDogs infielder Curtis Mead has been named the Low-A East Player of the Week for the week of June 14-20 per a Minor League Baseball announcement on Monday afternoon. Mead was a key cog as the RiverDogs won five of six games in Myrtle Beach during the recently completed road series.

The 20-year-old played in all six games against the Pelicans, compiling a .407 batting average over 28 at bats.  He recorded five doubles and a pair of home runs while collecting ten runs batted in to nearly double his season total. Mead also stole a pair of bases and scored six runs.

The native of Adelaide, Australia, has been one of the most consistent and productive hitters in the league all season. He leads the Low-A East with 14 doubles, is tied for first in hits, ranks third in extra-base hits, tied for third in total bases and tied for eighth in batting average. He recently compiled a 13-game hitting streak as part of a larger 18-game on-base streak.

Mead was acquired by the Tampa Bay Rays in a 2019 trade with the Philadelphia Phillies.  Originally signed by the Phillies in 2018 as an international free agent, Mead spent each of his first two professional seasons with the Phillies Gulf Coast League affiliate.  He hit .285 with four home runs and 19 RBI during the 2019 campaign.

The RiverDogs return to The Joe to battle the Augusta GreenJackets on Tuesday night at 7:05 p.m.  It will be another Dog Day presented by Island Coastal Lager featuring $2 beer and hot dogs.  Fans are also invited to bring their four-legged friends with them to the game.