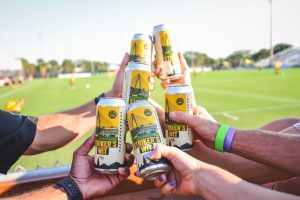 The Charleston Battery announced the launch of a collaboration craft beer with Rusty Bull Brewing Company. The new Striker’s Wit will be available to fans at Patriots Point for the season as well as at the North Charleston brewery.

“In this community, the Charleston Battery has a long tradition and actually is the longest [continuously run] professional club in the U.S.,” said Rusty Bull co-owner Brian Bogstad. “We’re excited to collaborate with the home team and launch the Striker’s Wit with the Battery.”

Striker’s Wit is described as a light-bodied Belgian witbier made to be enjoyed all summer long.

“We wanted to produce something that people could drink throughout the day at 4.8% [ABV],” said Ben Mayer, Rusty Bull’s co-owner.

“It’s a beautiful, crisp, light and refreshing Belgian-style wit…it’s a beer you can drink a few of,” the brewers added.

Fans can get the first taste of Striker’s Wit at the beer’s official launch party taking place Wednesday, June 23rd at Rusty Bull’s North Charleston location while watching the Battery take on Charlotte Independence on the road. The beer will be available throughout the rest of the season at Patriots Point, at Rusty Bull’s brewery, and soon to be available for purchase at retail locations throughout the Charleston area.

“Supporting local craft breweries and supporting your local team go hand in hand,” said Battery head of community Scott Krenitski. “We always want to bring the best of Charleston to our stadium at Patriots Point, and Rusty Bull absolutely represents that. We’re excited to partner with them on this unique collaboration, and provide fans a refreshing local brew that can be enjoyed all summer in the Lowcountry.”

Follow us
Related Topics:charleston batteryrusty bull brewing co
Up Next