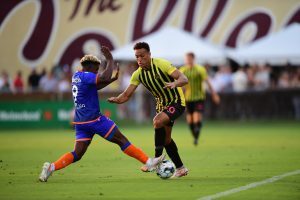 The Battery secured their first home victory of the 2021 season with a 2-1 win over Miami FC in front of another sold-out Patriots Point. Charleston-native Joel Bunting scored what proved to be the match-winning goal in the 50th minute to break the 1-1 tie. The goal was the first of Bunting’s professional career, who also made his first professional start.

Charleston returned to play in their first home game since May 23 and featured a 3-5-2 formation for the first time this year. Miami struck first in the 7th minute when Lamar Walker’s free kick weaved through the fray and past goalkeeper Joe Kuzminsky into the net. Miami had a flurry of early chances with Walker and Callum Chapman-Page providing shots in the first 20 minutes of play.

The Battery struck back in the 24th minute when Zeiko Lewis sent a scissor kick past the Miami defense to even the score 1-1. Lewis was assisted by Burke Fahling, who crossed the ball into the center of the box for Zeiko to level the terms. The goal was Lewis’ second of the season. Charleston had a chance to take the lead in the 41st minute when Angelo Kelly had the ball in a dangerous spot in front of the net, but his shot went over the crossbar.

Charleston entered the second half with energy as Lewis sent a shot in the 47th minute but his attempt went wide. The Battery took the lead in the 50th minute when rookie Joel Bunting scored his first professional goal to go ahead 2-1. Bunting was assisted by AJ Paterson, who redirected the ball at the goalline to Bunting after Kelly crossed the ball into the 6-yard box.

The Battery defense held their ground in the face of a resilient Miami squad to preserve the lead. Charleston goalkeeper Joe Kuzmisky saved a threatening shot from Adonijah Reid in the 64th minute, and the Battery blocked Lamar Walker’s 65th-minute shot. The Battery almost doubled their lead in the 76th minute when Leland Archer sent in a dangerous header, but his attempt missed to the right. Charleston stayed resolute to maintain the 2-1 lead for their first home victory of the season.

Battery forward Joel Bunting discussed coming back from down a goal.