Father & Son In Town This Weekend To Promote & Sign Books

‘100 Days In Vietnam : A Memoir of Love, War, and Survival‘, is 295 pages of unwavering love for country, patriotism, and family. Charleston native and retired US Army Lt. Colonel Joseph F. Tallon offers up a compelling chronicle of his more than three months in Vietnam, including the incredible journey he overcame after being shot down during the war, and the even bigger hurdles he faced upon returning home, including his crusade to remain on active duty.

With help from his son, retired US Army transportation officer Matthew A. Tallon, ‘100 Days In Vietnam’ is a moving account how the elder Tallon, a 25 year old pilot during the summer of 1972, took a direct hit at low altitude, and managed to right his plane before ejecting from a little more than 100 feet above the ground.

While Tallon survived albeit severely burned and injured, his flying companion Specialist 5th Class Daniel Richards did not. The final words Daniels shared in the cockpit before the two soldiers went down “Sir, we’ve been hit in the number two engine” are forever etched in Joseph Tallon’s mind. 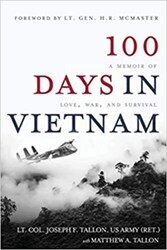 Although ‘100 Days In Vietnam’ portrays self sacrifice and a never ending commitment to bring honor and glory to Tallon’s fallen comrade, the nearly 50 year recollection of Tallon’s life reflects a love story for his beloved Martha Anne, as well as a military bond connecting three generations of the Tallon family.

Aside from the aftermath and visible scars associated with being wounded during war time, ‘100 Days In Vietnam’ details the younger Tallon’s efforts to assure his father is awarded a Purple Heart for his courageous service, much to the delight of Joseph’s father Harry who fought in World War II. Furthermore with the aid of South Carolina Congressman turned freshman US Senator Tim Scott, the combined Tallon mission ends in securing a Purple Heart for Daniels’ family, something Joseph was adamant about after having been awarded himself.

Although neither Tallon’s (father & son) are professed authors, Joseph paints a vivid landscape during his actual 104 days in Vietnam, sharing witticisms, as well as describing in detail the sights and sounds of the war. His memory is concise when depicting gunfire, the smell of charred flesh, his agonizing time in hospital immediately after his incident, and the countless surgeries he would endure in the following years.

Joseph adds enough low country imagery to captivate native Charlestonians, including graduating from Baptist College (now CSU) in late 1960’s, and earning a master’s degree in teaching from the Citadel degree in 1981. His recollections of Piggly Wiggly and their Greenbax Stamps program, the Stono River Landing, as well as the VA Hospital provide deeper ties to Charleston.

What makes ‘100 Days In Vietnam’ most poignant are the letters and audio tapes Joseph and Martha Anne share during their separation. The love they share and their deeply rooted Christian faith increase with each correspondence. Rather touching are his memories of his day at the White House and being entertained by First Lady Betty Ford, as well as Matthew’s birth in June of 1979 at Trident Hospital.

Matthew’s introduction and quest are the ideal bookends to Joseph’s emotional narrative. His allegiance to his grandfather, as well as his appreciation and respect for his father’s plight deepens with every turn of a page.

If you’re a flag waving American patriot, retired or active duty service member, or appreciate military history, than ‘100 Days In Vietnam : A Memoir of Love, War, and Survival’ will give you a greater respect for our men and women in uniform, and the sacrifices they often make to secure our freedom. The story combines several elements. It’s gripping, sad yet happy, ripe with irony, and overall a testament to the human spirit.

Expected to be in full release in June, it would make a fine Father’s Day gift, especially for those with a strong military or family connection. Joseph and Matthew Tallon plan to be in Charleston the week prior to Father’s Day to sign books at Main Street Reads in Summerville on June 17th from 5:30-8:30pm, The Beaufort Bookstore in Beaufort on Friday, June 18th from 2:00-6:00pm, returning to downtown Charleston at Buxton Books 160 King Street on Saturday, June 19th from 1:00-3:00pm. The booksellers will have the books available for purchase.

For more on the book or to get an advance copy visit https://www.matthewtallon.com/

Taylor Hicks Pivots Due To Heavy Rain At Firefly Concert