ESTERO, Fla. – Cole Ully found the back of the net twice and goaltender Hunter Shepard stopped 25 shots as the South Carolina Stingrays (3-2) defeated the Florida Everblades (2-3) by a final score of 3-2 in Game 5 of the Eastern Conference Semifinals on Monday night at Hertz Arena.

After winning the best-of-5 first-round Kelly Cup Playoff series 3-2, the Stingrays advance to face the Greenville Swamp Rabbits in the 2021 Eastern Conference Finals, which will begin Wednesday night in North Charleston at the Carolina Ice Palace at 7:05 p.m. A full schedule of the best-of-5 series is below.

South Carolina got ahead 1-0 in the opening period when forward Dylan Steman scored on a wraparound at 15:49. Forward Mark Cooper picked up the lone assist on the play, leaving the puck to Steman who snuck it past the left pad of goaltender Jake Hildebrand to give the Rays an early advantage.

Florida evened things up in the middle period when Joe Pendenza converted on the power play at 6:42 to tie the game 1-1. 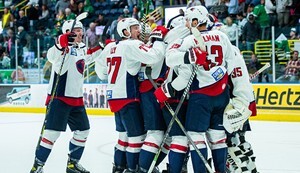 Just over five minutes later during 4-on-4 play, Ully netted his first of the night and second of the postseason at 12:01 after picking up a feed in deep from Dan DeSalvo. He quickly turned around and beat Hildebrand with a wrist shot from the bottom of the right circle and SC had a 2-1 lead.

But in the final minute of the second, Cameron Hebig scored another Everblades’ power play goal to deadlock the game at 2-2 with just 26 seconds to play in the middle frame.

Ully’s game winning tally came at 8:17 of the third from DeSalvo and defender Macoy Erkamps, and with Florida pushing for a comeback in the final half of the period, SC allowed just six total shots on their way to victory.

The teams finished even on the night with 27 shots on goal apiece. Hildebrand, the ECHL’s Goaltender of the Year, turned aside 24 attempts in a losing effort for the Everblades. Both Florida goals came on the man-advantage and they finished 2-for-4, while the Stingrays ended at 0-for-1 on the power play.