Cherniwchan, Cooper Each Score Twice in Game 4 Victory over Everblades

ESTERO, Fla. – Forwards Andrew Cherniwchan and Mark Cooper each scored twice and the South Carolina Stingrays (2-2) rode an early three-goal lead to a 4-2 victory over the Florida Everblades (2-2) in Game 4 of the Eastern Conference Semifinals Sunday evening at Hertz Arena.

The best-of-5 first-round Kelly Cup Playoff series is now tied 2-2 with a deciding Game 5 scheduled for Monday night at Hertz Arena at 7:30 p.m.

Both of Cherniwchan’s goals came in the opening 20 minutes, while Cooper scored one in the first and another in the second for SC in the win. Goaltender Hunter Shepard earned the win for SC by stopping 29 shots, including a penalty shot attempt during the second. 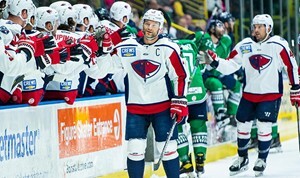 After the Stingrays fended off multiple opportunities for Florida in the opening minutes, including an early 2-on-0, Cherniwchan netted his first of the postseason on the power play at 3:19 to put SC up 1-0. An initial shot by defender Max Gottlieb was knocked down in front and went right to Cherniwchan, who put it to the top right corner of the net. Forward Matthew Weis picked up the second assist on the play.

Cooper made it 2-0 later in the fame after a feed from Dan DeSalvo set him up at the side of the net. The Toronto, Ontario native maneuvered around goaltender Jake Hildebrand’s left pad before slipping the puck past the goal line at 12:02 of the first. A second assist was credited to Cole Ully on the play.

1:29 later, Cherniwchan scored his second of the period by redirecting a feed from Zach Malatesta to the back of the net for a 3-0 lead. Forward Caleb Herbert picked up the second helper, his second of the playoffs, on the goal which was scored at 13:31.

Before the end of the opening frame, the Rays successfully killed off a 5-on-3 power play that Florida earned after back-to-back penalties were whistled to Dan DeSalvo for hooking and Tariq Hammond for delay of game.

The Everblades did cut the lead down to 3-1 on a goal by Alex Kile at 8:20 of the middle period, but Cooper put the Rays back up by three goals at 4-1 with his second tally of the night at 12:22. Defender Tyler Nanne found the attacker wide open on the right wing and after his initial shot was stopped by Hildebrand, Cooper punched in his own rebound.

Florida Head Coach Brad Ralph elected to make a goaltending change after the fourth SC goal, replacing Hildebrand with backup netminder Devin Cooley. Hildebrand finished the contest with eight saves in 32:22 of action, while Cooley was a perfect 14-for-14 in 25:26 of ice time.

Once again at the end of the period, SC successfully discarded their second 5-on-3 penalty kill of the game, keeping the score at 4-1 prior to the second intermission.

Florida’s Joe Pendenza scored at 7:11 of the third period to cut the Stingrays’ lead to 4-2, but nothing else got past Shepard in the final minutes of the contest, including when the Everblades pulled Cooley for an extra attacker.

Cherniwchan’s opening goal was the lone power play tally of the contest, with SC finishing 1-for-2 on the man-advantage while holding Florida to 0-for-5. The Everblades had the edge in shots on goal for the first time in the series, outshooting the Stingrays 31-26.