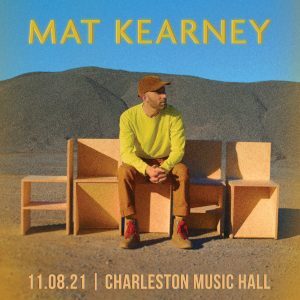 Multi-Platinum singer, songwriter, and producer Mat Kearney, who has racked up 2.5+ billion streams across platforms, has announced the first leg of his January Flower tour, which will include a stop at the Charleston Music Hall on Monday, November 8th at 8 pm.

Kearney is touring in support of his his brand-new album January Flower, which has quickly racked up 15+ million streams with prominent playlisting from Spotify, Apple Music, Amazon, YouTube, Tidal, and more.

To purchase tickets to the Music Hall show, click here.
–