After falling behind in the first and second periods, the South Carolina Stingrays (1-1) came charging hard in the third with four goals, but ultimately fell short to the Florida Everblades (1-1) by a final score of 5-4 in Game 2 of the Eastern Conference Semifinals Wednesday night at the Carolina Ice Palace.

The best-of-5 series, tied 1-1, shifts to Estero, Florida this weekend for Game 3 on Saturday at Hertz Arena at 7 p.m. 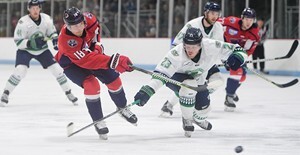 Four different scorers found the back of the net for SC in the third, while Dylan Steman and Max Gottlieb each collected two assists during the run.

Florida got ahead 2-0 in the first, striking twice in just under a minute late in the opening frame when Alex Kile scored unassisted at 16:10 before Levko Koper netted his second in as many games at 17:09.

The Everblades then extended their advantage in the middle period, scoring three more times to make it 5-0 at the end of 40 minutes. Michael Huntebrinker scored at 5:30, while Zach Solow found the back of the net at 15:33 and Myles Powell added an insurance marker at 17:49.

But the Stingrays didn’t sulk in the third and came out full of energy after making a change in goal, replacing Hunter Shepard with Jake Kupsky.

SC got on the board just 52 seconds into the final frame when Justin Florek deflected home a shot by defender Macoy Erkamps. Steman got credit for the second assist on the play.

Then Brett Supinski scored on the power play at 4:23 on another re-direct off a shot by Matthew Weis to cut the deficit to 5-2. Gottlieb picked up the second helper on the tally.

Forward Cole Ully one-timed a shot past goaltender Jake Hildebrand to continue the Rays’ momentum at 8:58 of the third, making the score 5-3. The shot came off a pass by Max Novak, while Gottlieb recorded the second assist.

Less than a minute later, with a delayed penalty coming on Florida, SC found their fourth tally of the period when Tyler Nanne forced a loose puck past the goal line. Assists on the play went to Steman and Mark Cooper.

Despite more chances later in the closing minutes, South Carolina was unable to complete the comeback.

The furious rally saw the Stingrays outshoot Florida 14-6 in the final stanza and ended up with the edge in shots-on-goal for the game, 23-22. Hildebrand earned the win for the Everblades stopping 19 shots, while Shepard took the loss for SC with 11 saves. Kupsky turned aside six shots in relief during the final 20 minutes.

Both clubs converted once on the power play with SC going 1-for-4 and Florida ending at 1-for-5.

After Game 3 on Saturday in Florida, Game 4 is scheduled for 6 p.m. on Sunday evening. If necessary, the series would finish with Game 5 on Monday at Hertz Arena at 7:30.