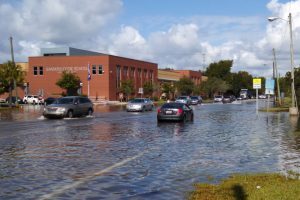 Residents of coastal communities around the Southeast know the impact of a changing climate firsthand. They witness flooding. They experience rising temperatures. And they endure increasingly menacing weather. Charleston, South Carolina, is no exception. That’s why it’s reassuring to know that the city government here recently adopted a new Climate Action Plan.

This spring, Charleston City Council voted unanimously to accept and implement a new five-year plan that’s subtitled “An Equitable Strategy for a Healthier Future.” Proponents say the plan’s goals and guidelines will help this community mitigate – and adapt to – the impacts of climate change. And those closely involved say the plan wouldn’t exist in its current form without input and support from various members of the College of Charleston community.

Darcy Everett, the College’s sustainability director, was integrally involved in the process. She served on the Climate Action Plan Taskforce and several of the subcommittees. Political science professor Kendra Stewart, who directs the College’s Joseph P. Riley Jr. Center for Livable Communities, sits on the city’s Resiliency and Sustainability Advisory Committee, the group that oversaw the work on this plan. Both she and Everett regard the plan as a strong step in the right direction.

“This is a substantial plan,” Everett explains. “It purposely covers a wide range of areas, which reflect the five subcommittees involved in developing it. We had a buildings subcommittee, a carbon sink subcommittee, one for transportation issues, one for waste and an education subcommittee. That approach purposely covers the big areas of emissions that are created by all of us in Charleston. And the city’s sustainability director Katie McCain did a great job of bringing in a broad range of stakeholders from all across the community to help develop it. We had representatives from businesses, universities, nonprofits and community organizations. So, there was a lot of input from a lot of different viewpoints, and that’s good.”

The city’s webpage presenting the Climate Action Plan indicates that over 150 members of the community participated in its development. Everett confirms that, saying many of the subcommittee Zoom calls were attended by 40 to 50 different people each time. Among those were professors, staff members and alumni from the College.

John Morris, vice president of Facilities Management for CofC, was a member of the buildings subcommittee. Lucy Davis, who coordinates the graduate program in environmental and sustainability studies, was on the waste subcommittee. Psychology professor Jen Wright and admissions counselor Arian Bonetto Fernandez both worked as members of the education subcommittee. In addition, several alumni played pivotal roles in helping develop the plan.

“I think the plan ties in closely with what the College is doing regarding climate change,” says Everett. “And whatever the city enacts in this area, the College will ultimately have to abide by as a member of this community. That’s sufficient reason for us to be involved, but the development of the plan presented a unique opportunity as well. As the College goes through developing its own climate action plan, based on our greenhouse gas emissions assessment and other key data, we can learn from the steps that were taken to create the city’s plan. Ultimately, I think it will serve as a guidepost for our own climate action plan.”

The city’s new plan includes 12 strategies and 51 action items intended to achieve specific goals based on specific metrics. For example, by 2030, the plan calls for the community to cut carbon dioxide emissions in the area by 56 percent below 2018 emissions.

The five-year format, Everett says, is an important aspect of the strategy that underlies the new plan.

“Five years from now, we’ll be in a different situation regarding technology – from electric vehicles to carbon sequestration,” she offers.

Everett says generally everyone involved in creating the new plan wanted it to be realistic, with achievable goals. She says that’s why it includes a checklist of climate-friendly daily practices anyone can adopt.

“Offering that checklist is important,” she says. “We have to understand that the City of Charleston isn’t going to solve our climate change problems. It’s going to require everyone in the community to participate for this plan to work. And the College can play a pivotal role in that. There are lots of potential opportunities for our students to get engaged. All of us can help inform and engage community members. On campus, we face a parallel situation. The College’s sustainability professionals aren’t going to fix all our issues. Everyone on campus has to be involved.”