The worldwide COVID-19 pandemic played havoc with sports schedules across the globe. The Tokyo Summer Olympic Games were postponed for a year. That was where Canadian swim fans were excitedly awaiting the second act from Canada’s Penny Oleksiak in the pool following her record-setting performance at the 2016 Rio de Janeiro Summer Games. 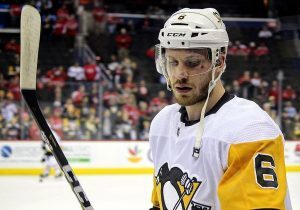 “Jamie Oleksiak” by Wikimedia is licensed under CC BY-NC-SA 2.0

Certainly, the best betting sites will be offering sharp odds on Oleksiak delivering a golden moment when the rescheduled Olympiad goes forward in the summer of 2021. As for the summer of 2020, instead of watching Penny chase after a gold medal, Canadian sports fans were treated to her older brother Jamie’s pursuit of a silver mug.

Jamie Oleksiak played a stellar role along the defense for the Dallas Stars as they made a surprising run to the Stanley Cup final before succumbing to the Tampa Bay Lightning.

“It’s great for Jamie, this is the best hockey that we’ve seen him play,” Stars coach Rick Bowness told the Edmonton Sun of Oleksiak’s performance during the 2020 playoffs, which were delayed until summer by COVID-19. “We saw this at the beginning of last year and we said that immediately after the playoffs (last year) that we missed Jamie in that series.”

Injury kept Oleksiak out of the 2019 playoffs. Dallas lost in Game 7 of Round 2 to the eventual Stanley Cup champion St. Louis Blues.

“Not having him in St. Louis was a big factor because of that size and his mobility,” Bowness said of the 6-foot-7 Oleksiak. “Now you’re seeing a tremendous amount of confidence with the puck. He’s tremendously poised with it, not afraid to take gambles offensively and get up ice, which we’ve encouraged.” 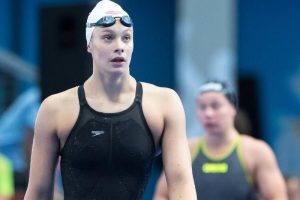 “Penny Oleksiak” by Mike Lewis is licensed under CC BY-NC-SA 2.0

In the summer of 2016, Penny Oleksiak won four Olympic swimming medals for Canada as a 16-year-old in Rio – gold in the 100-metre freestyle, along with one silver and two bronze medals. Penny was Canada’s youngest-ever Olympic gold medalist and the first Canadian athlete to win four medals at a single Summer Olympiad.

No one was prouder of her achievements, or more aware of the challenges she overcame to make it so, than her older brother.

“I understand the kind of sacrifice she’s gone through,” Oleksiak told the Windsor Star. “Just being a competitive athlete like that, it takes a lot of dedication, a lot of discipline.”

Jamie was in Rio to see his sister’s record-setting performance, as she etched her name into Canadian Olympic history. Their family has taken the same even-keeled approach to Penny’s success in the pool as they’ve done with Jamie’s ascension on the ice.

The family reward for Jamie making Canada’s world junior hockey team was allowing him to get a pet dog. Penny’s reward for her four-medal Olympic performance was also a new puppy.

“We’re always wishing each other well, and we’re trying to support each other as much as possible, but we don’t put either of us on a pedestal,” Jamie explained. “She’s definitely got a good head on her shoulders. I think she’s got the work ethic to do well. I think being so young and having that amount of determination, it’s just unbelievable. That’s something I try to bring to the rink.

“That’s definitely what pulled her up to that next level.

“She’s just got a really good attitude. The big thing is she just loves what she does, and she makes sure she always has a passion for it and she’s been able to make herself good at it, too.

“Mostly, we’re just glad she’s doing something that she enjoys and she’s passionate about it.”

Each member of this sextet either won a medal or was Canada’s top finisher in their event at the 2019 world championships. Canada swam to its best-ever performance at those worlds. The country produced eight podium finishes, with two gold medals and six bronze medals.

Coping with depression; 5 things you should try

5 Common Causes of Motorcycle Accidents (and How to Prevent Them)