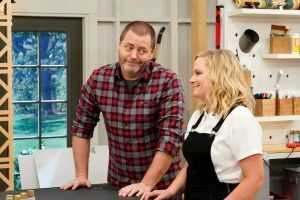 Charleston-based artist Becca Barnet of Sisal Creative will compete on Season 3 of NBC’s Making It. This crafting competition is hosted by Amy Poehler and Nick Offerman and has been watched by over 20 million viewers.


According to the show description, “the best makers from around the country take on a series of handmade projects they must complete in their own unique way. As the competition goes on, the challenges become increasingly difficult, and the least successful maker is eliminated each week. The show culminates in a final craft-off between the last few makers.”

Barnet traveled to LA to be on the show and said the experience was amazing.

“For a modest and pun-filled crafting competition, Making It was a huge production,” she said. “We worked long hours and gave it our all to make some amazing artwork for the viewers at home! It was a dream to work alongside Nick, Amy and the super talented makers.”

The show premieres on June 24th, 2021 and will be on every Thursday night at 8 pm on NBC for 8 weeks. It will also be available to view on Hulu the following day.

Born in Spartanburg, Barenet has called Charleston home since 2012. Becca says her work is driven by a fascination with natural history and preservation. A graduate of the Rhode Island School of Design with a BFA in Illustration, she also attended the Missouri Taxidermy Institute where she fine-tuned her special knack and patience for taxidermy repair – from cleaning to complete mount renovations.

She has worked for the American Museum of Natural History as well as the South Carolina Aquarium as an exhibit fabricator. She’s put her precision and passion into Sisal Creative, a full service art studio offering interior design, museum design, illustration, and custom art installations.