Forwards Matthew Weis and Mark Cooper each registered a goal and an assist and Hunter Shepard stopped 29 shots to help the South Carolina Stingrays (32-24-10-3) secure a 3-1 win over the Wheeling Nailers (21-38-6-1) on Tuesday night at the North Charleston Coliseum.

The win kept South Carolina alive for a chance at a spot in the 2021 Kelly Cup Playoffs with just two games remaining in the team’s regular season schedule. SC trails Orlando for fourth place and the final postseason berth by a slim points percentage margin. The Solar Bears are currently at .572, while the Rays sit at .566.

The two teams played a scoreless first period in which SC held an 11-8 shots-on-goal advantage. 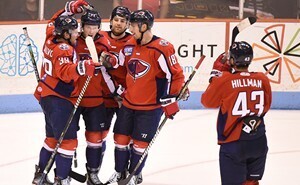 Weis got the scoring started at 3:28 of the middle frame, lighting the lamp for the 10th time this season on an outstanding passing play off a rush into the offensive zone. First, Cooper fed the puck into the zone with space for forward Dylan Steman to control it, and then Steman backhanded perfectly onto the stick of Weis, who buried a shot to the top left corner and give SC a 1-0 lead.

Wheeling responded just under four minutes later, however, when Patrick Watling blasted a one-timer by Shepard at 7:27 to even the score at 1-1.

Before the end of the second period, the Stingrays converted on the power play when defender Max Gottlieb put a shot toward the net that deflected in off Cooper in front. Cooper’s 11th strike of the season came at 16:31 of the frame with a second assist by Weis to get SC back in front, 2-1.

With time running out in the third, Cole Ully provided insurance at 15:42, scoring his team-leading 22nd tally of the year off a pass in front of the net by Dan DeSalvo to make it 3-1. Forward Max Novak earned the second assist on the play.

The Rays denied any late chances Wheeling put towards the net in the closing minutes, with Shepard completing a perfect third period after stopping 13 shots on goal.

Both teams put a total of 30 shots on net in the game, while SC scored the lone power play goal of the contest, going 1-for-3 and holding Wheeling to an 0-for-2 mark on the man-advantage. Wheeling goaltender Tommy Nappier stopped 27 shots for his team in a losing effort.

South Carolina finished the 2020-21 season with a perfect 6-0-0 record against the Nailers and an 11-0-1-0 mark against teams that normally play in the Central Division (Fort Wayne, Indy, Wheeling).

The Stingrays will travel to Orlando for a showdown with the Solar Bears on Thursday night at the Amway Center at 7 p.m. SC returns home for their final regular season contests Saturday against the Jacksonville Icemen on Fan Appreciation Night at the North Charleston Coliseum. All single-game tickets are $10 for the final Rays regular season home game of the year.