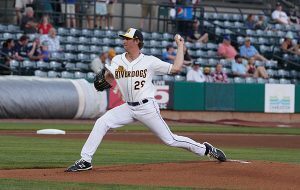 Charleston RiverDogs starting pitcher John Doxakis has been named the Low-A East Pitcher of the Month for May, Minor League Baseball announced on Wednesday afternoon. The southpaw earned the honor by allowing just two runs in five starts to open the season.

Doxakis was also recognized as the Low-A East Pitcher of the Week for his efforts during the opening series of the year May 4-9.  During his 22.0 innings of work in May, Doxakis compiled a 3-0 record and 0.82 earned run average.  The 22-year old struck out 33 batters while walking only three and limited the opposition to a .096 batting average.  Doxakis has recorded at least five strikeouts in every appearance this season and seven or more in three games.

“This is an incredible and well-deserved honor for John”, said RiverDogs manager Blake Butera. “He works extremely hard on his craft and it’s great to see the success on the field follow.  Our players and staff are very excited for him.”

The Tampa Bay Rays selected Doxakis in the second round of the 2019 draft out of Texas A&M.  Following the draft, he pitched in 12 games for the Hudson Valley Renegades, the Rays former short-season affiliate.  Over 32.2 innings with Hudson Valley, Doxakis posted a 1.93 earned run average, allowing opponents to hit just .174 against him.  To this point in his professional career, Doxakis has recorded 64 strikeouts with only 14 walks in 54.2 innings.

Doxakis will be on the mound tonight in Augusta as the RiverDogs play game two of their road series against the GreenJackets at 7:05 p.m.  The broadcast of all 120 RiverDogs games is available online at riverdogs.com.

RiverDogs Rally Comes up Short in 7-4 Loss at Augusta