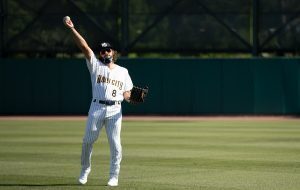 The Charleston RiverDogs completed a series sweep of the Fayetteville Woodpeckers with a 12-2 win on Sunday evening at Joseph. P. Riley, Jr. Park.  The game was played in front of 4,862 fans. The RiverDogs finished their 12-game homestand with an 8-4 record.  With six wins in a row, the team has put together their longest winning streak since April of 2016.

The RiverDogs (15-9) scored multiple runs in the fourth, sixth and seventh innings to pull away from the Woodpeckers. Fayetteville briefly took a 1-0 lead in the top of the fourth inning on a solo home run from Juan Paulino, but the RiverDogs responded immediately.  In the bottom of the frame, Hill Alexander launched a three-run home run, Johan Lopez lifted a sacrifice fly to center and Brett Wisely singled home a run to push the RiverDogs in front 5-1.

In the sixth, Charleston added to their advantage with a pair of long balls.  Abiezel Ramirez followed an Alexander double with his second home run of the season to extend the lead to 7-1.  Later in the frame, Jonathan Embry did the same thing with a no-doubt home run to right field for his second round-tripper of the season.

The Woodpeckers (9-15) scored a single run in the top of the seventh to trim the lead to 9-2, but the RiverDogs answered immediately once more.  Luis Leon finished off a 3-3 day at the plate with an RBI single and two more runs crossed the plate via wild pitches to reach the final margin of 12-2.

Eight of the nine players in the lineup finished with at least one hit.  Leon led the way with three, while Alexander and Ramirez had two each.

On the mound, Taj Bradley earned the win by working 4.0 innings out of the bullpen and allowing one run on four hits.  Luis Moncada made his 2021 debut by tossing 2.0 scoreless innings as the starter.  Stephen Yancey allowed one run in 2.0 innings and Colby White finished the game by retiring the side in order in the ninth.

Ballpark Fun
The RiverDogs capped a 12-game homestand by welcoming their largest crowd of the season to The Joe.  The increased attendance numbers are part of the team’s plan to responsibly ramp up attendance for home games.  The crowd of 4,862 had plenty to cheer about and was a factor throughout the contest.

The RiverDogs will take Monday off before traveling to Augusta for a six-game series at SRP Park that begins Tuesday night at 7:05 p.m. Both teams have yet to announce the starting pitchers for game one.