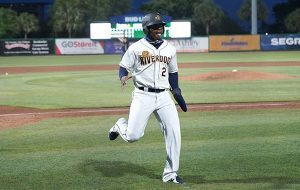 Curtis Mead’s RBI double in the bottom of the eighth inning broke a tie and propelled the Charleston RiverDogs to a 7-6 win over the Fayetteville Woodpeckers on Saturday night at Joseph P. Riley, Jr. Park. The RiverDogs erased a six-run deficit to claim their fifth consecutive win.  The game was played in front of 3,597 fans.

Fayetteville (9-14) jumped out to a quick 6-0 lead over the game’s first three innings. J.C. Correa hit an RBI double in the top of the first inning,  Shay Whitcomb punctuated a three-run second by blasting a two-run home run and Yeuris Ramirez scored two more with a double in the third.  RiverDogs starter Jose Lopez surrendered all six runs on five hits over 3.0 innings of work.

The Charleston bullpen was brilliant the rest of the way, limiting the Woodpeckers to just four baserunners over the final six innings.  Seth Johnson tossed 3.0 scoreless innings, allowing just two hits while striking out four.  Andrew Gross closed the game with 3.0 perfect innings to earn the win.  The right-hander has not allowed a run in his last 14.0 innings on the mound and has been perfect over his last 6.0 innings of work.

The RiverDogs (14-9) offense took advantage of the bullpen’s work by reaching the scoreboard in the bottom of the third inning when Alika Williams drove in Abiezel Ramirez with a sacrifice fly.  The game tightened considerably in a disastrous fourth inning for Fayetteville.  Four runs scored with the aid of just one hit, an RBI single by Hill Alexander.  The other runs resulted from six walks issued by the combination of starter Diosmerky Taveras and reliever Jonathan Sprinkle, allowing the home team to pull within 6-5.

Fayetteville still held a one-run lead entering the seventh inning.  With two outs and Jonathan Embry on first, Ramirez hit a shallow fly ball to right that dropped out of the reach of right fielder Bryan Arias.  Embry raced around third trying to score and, despite the throw beating him to the plate, avoided the tag of Nerio Rodriguez with an athletic slide to tie the game.

In the eighth, the RiverDogs wasted no time breaking the tie against Ernesto Jaquez.  Alika Williams narrowly missed a home run in the first at bat of the inning, settling instead for a leadoff triple that caromed off of the scoreboard. Mead followed by lacing a double off the very top of the left field wall to plate the game-winning run.  Mead has collected six RBI in the series and is batting .370 over his last 14 games.

Seven of the nine players in the Charleston lineup tallied a hit.  Mead was the only player with multiple hits and multiple runs batted in.  Ramirez and Embry each scored a pair of runs.

Ballpark Fun
The RiverDogs spent the night celebrating the 25th anniversary of the macarena by tipping their cap to viral trends.  During the seventh inning stretch, staff members and ushers stormed to the top of the dugouts, creating a flash mob complete with a choreographed dance routine.

The series will conclude on Sunday evening at 5:05 p.m.  LHP Luis Moncada will make his RiverDogs debut on the mound.  He will be opposed by Fayetteville RHP Shea Barry (0-0, 3.00).  Bring the kids along with you to the game as part of MUSC Health Family Sunday.  The RiverDogs will be sporting their pinstriped “Holy City” uniforms on the field.

RiverDogs Rally for 5-4 Victory, Win Fourth in a Row