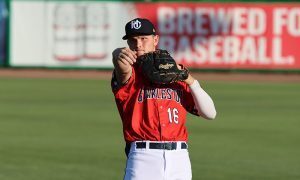 The Charleston RiverDogs registered their largest comeback win of the season, erasing a three-run deficit to beat the Fayetteville Woodpeckers 5-4 on Friday night at Joseph P. Riley, Jr. Park.  The win was the team’s fourth in a row to open the series, representing the longest winning streak of the season.  The game was played in front of a season-high 4,603 fans.

Fayetteville (9-13) reached the scoreboard first against RiverDogs starter Cole Wilcox in the second inning.  Juan Paulino reached base with one out via a throwing error by shortstop Abiezel Ramirez.  He was then running on a pitch to Jose Alvarez that was bounced to first.  The RiverDogs recorded an out, but Paulino advanced all the way to third on the play and would cross the plate on a wild pitch.  Nerio Rodriguez extended the Woodpeckers lead to 3-0 with a bases loaded single down the first base line in the third inning.

Curtis Mead came through with his first big hit of the night in the bottom of the third inning.  The Adelaide, Australia native hit his second home run of the season, a solo shot over the wall in right field off of Alfredi Jimenez, to put the RiverDogs on the board.  The home team pulled even closer in the sixth inning against the Fayetteville bullpen.  Jonathan Embry tripled into the right field corner and scored shortly afterward on an Alexander Ovalles single.

The RiverDogs (13-9) surged into the lead with a two-run seventh inning against Freylin Garcia.  Nick Schnell worked a walk to start the inning and quickly scored on Mead’s game-tying double down the right field line.  Mead advanced to third base on a deep fly ball off the bat of Brett Wisely and scored the go-ahead run on a sacrifice fly from Diego Infante.  Abiezel Ramirez tacked on an insurance run in the eighth with a double to the wall in left that plated Ovalles.

The insurance proved large when Juan Paulino hit a solo home run, his first of the year, in the ninth inning against Angel Felipe.  The right-hander surrendered two singles later in the inning, but ended the game with a strikeout of Justin Dirden.  Felipe picked up his first save of the season, despite surrendering an earned run for the first time.

Mead finished the game 2-5 with a double, home run and two runs batted in to lead the RiverDogs attack.  Heriberto Hernandez reached base three times with a double and two walks.

Ballpark Fun
The largest crowd of the season at The Joe witnessed a pre-game ceremony inducting two new members to the team’s Hall of Honor. The Hall of Honor represents an arm of the RiverDogs and Boeing’s joint Military Appreciation platform, which aims to bring increased recognition and support to the Lowcountry’s military families. The newest inductees are Brigadier General Thomas Mikolajcik of the U.S. Air Force and Chief William Tetrev of the U.S. Navy. To view the Hall of Honor click here.

The RiverDogs will look to extend their winning streak on Saturday night at 6:05 p.m.  LHP Jose Lopez (2-2, 5.51) will receive the assignment for Charleston with LHP Brayan De Paula (2-0, 1.98) opposing him for Fayetteville.  The night will be dedicated to viral trends as the RiverDogs celebrate the 25th anniversary of the macarena.  Following the game, fans will be treated to a post-game light show featuring the LED stadium lights at The Joe presented by South Carolina 811.