Justin Florek broke a deadlock late in the third period with his 16th goal of the season and the South Carolina Stingrays (29-24-10-3) secured a 3-2 win over the Greenville Swamp Rabbits (34-19-11-3) in the final meeting of the regular season between the two in-state rivals on Wednesday night at the North Charleston Coliseum.

Dan DeSalvo assisted on all three of South Carolina’s goals in the game, while goaltender Hunter Shepard stopped 29 shots and Caleb Herbert registered two helpers in the victory.

After a scoreless first frame, forward Mark Cooper got SC on the board first with his 10th goal of the season from Herbert and DeSalvo. The attacker tried an initial shot that was blocked, but he grabbed the rebound behind the net and banked it in off a Greenville defender in front to make it 1-0 at 7:58.

Then at 11:22, defender Zach Malatesta opened up a 2-0 lead for the Rays with his eighth goal of the season on a wrist shot from the left circle that beat Greenville goaltender John Lethemon. Assists on the play also went to DeSalvo and Herbert. 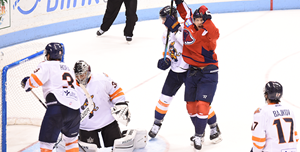 But the Swamp Rabbits did not go quietly in the third, storming back to tie the game at 2-2 with goals by Patrick Bajkov and Anthony Wyse at 1:33 and 8:56 of the period respectively.

SC defender Doyle Somerby set up Florek for the game-winning strike at 14:39, a redirect that the Rays back in front for good. A second assist on the play went to DeSalvo, who now has 35 helpers in 56 games this season.

Greenville finished with a 31-29 shots-on-goal edge, with Lethemon turning aside 26 SC chances in a losing effort. Neither club scored on the man-advantage in the contest, with the Swamp Rabbits going 0-for-2 and the Rays finishing 0-for-3.

South Carolina is back in action this weekend when they host the Wheeling Nailers at the North Charleston Coliseum on Friday at 7:05 p.m. and Saturday night at 6:05.

RiverDogs, Boeing to Induct Mikolajcik, Tetrev into Hall of Honor