So how have you guys been enjoying the NBA this season huh? Regular season do anything for ya? What about the play in the tournament? Oh, yeah you thought that was a pretty sweet way to do it too? How have you been enjoying the playoffs so far? Yeah, same, it’s just great nerding out over the stats and that’s exactly what we’re going to be looking at today, STATS!

Specifically, the triple double. You know the one, double digits in 3 different stats. We’ll be taking a look at a few different variants, the top 10 players who have the most triple doubles as well as some other interesting stats, not only that but we may even take a look at some of the NBA scores and odds from recent games so we can look forward and see who’s likely gonna be putting in those big game performances again! 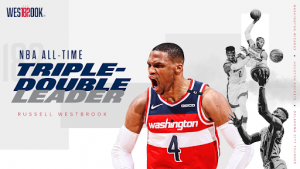 First things first, let us take a look at the highest performers in terms of the triple double, the kings of the court if you will. Realistically speaking, only the best players are going to be scoring consistent double digit figures in multiple categories, so without further ado let’s list ‘em! 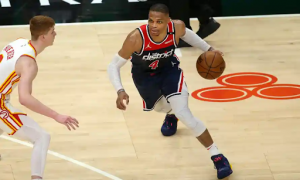 Russell Westbrook started his career in the NBA in 2008 where he was selected 4th overall in the 2008 draft by the Seattle SuperSonics which then ended up relocating to Oklahoma before they became the Thunder, he scored the first of his 182 triple doubles on the 2nd March 2009 during his rookie season, a 17 point, 10 rebound and 10 assist outing against the Dallas Mavericks.

While he is the stand out name when you look at the stats, through the first six years of his career he only managed to rack up EIGHT triple doubles but has added an insane 174 more triple doubles in the last 7 years. His single game triple double accomplishments include TWO games with 24 assists (January 10th 2019 and May 3rd 2021) which has him tied with Rajon Rondo and Isiah Thomas for the most assists in a triple double.

On May 3rd of this current season, Westbrook managed to add 14 points and 21 rebounds to his career high tying and franchise record tying 24 assists to record his second career game with AT LEAST 20 rebounds and 20 assists, the only player in league history with multiple games like it.

Not only that but he is also leading the league this season with 36 triple doubles, THIRTY SIX. Which is the second most triple doubles in a single season in his career and the THIRD most in league history, the numbers are pretty insane when you actually stop to think about it. Of course you can look at it this way, the way the game is played has changed SO much over the last few decades, not only that but it is MUCH faster paced now, so does this style just suit Russells playstyle? Would he still get these numbers if he played in the 70s? Who can really say?

That’s going to do it for this one, if you’re like me you’re just in awe at how much of an insane all round player Russell Westbrook actually is, not only that but he’s still absolutely slaying the game at 32 years old, usually by this point players will start to lose a yard of pace or their fitness will slowly start to slide, but this man shows no signs of stopping! How much longer can he continue to stack the stats? Where will the record be when he finally hangs up his shoes? Only time will tell!

10 WAYS TO SAVE MONEY ON A TIGHT BUDGET