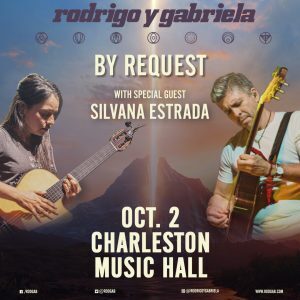 The GRAMMY Award-winning Mexican acoustic rock duo released their JAZZ EP on May 14th of the year. The release includes a 12” cloudy orange vinyl that is limited to 3,000 copies worldwide and individually numbered.

Over their career, the pair has released six studio albums, three live albums, and now three EPs. In 2011, they collaborated with Hans Zimmer on the Pirates of the Caribbean: On Stranger Tides soundtrack while also contributing to the soundtrack for Puss in Boots. They have toured internationally and in May 2010, performed at The White House for President Barack Obama.

In January 2020, their fifth studio album Mettavolution won a Grammy Award for the ‘Best Contemporary Instrumental Album’ at the 62nd Annual Grammy Awards.

Click here for more info and tickets to their Charleston concert.
–

Drive-By Truckers Coming to the Charleston Music Hall on Nov. 11