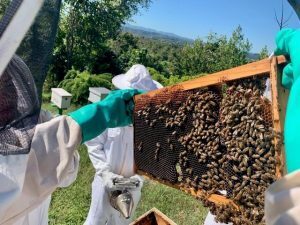 In honor of World Bee Day on May 20th, Charleston-based non-profit The Bee Cause Project – in partnership with Puerto Rican non-profit organizations Para La Naturaleza and Be a Bee, and sponsor Dixie Vodka – announces a new honey bee sanctuary set to open this June in Puerto Rico, the commonwealth’s first-ever project of its kind.

In the wake of Hurricane Maria in 2017, Puerto Rico’s honeybee population was virtually decimated with more than 80 percent of the island’s bees destroyed. In response to the natural disaster, Isabelle Ramseyer, a student at Puerto Rico’s Saint John’s School in San Juan, created a student-run initiative called Be a Bee to bring awareness to the plight of the island’s bees and educate people about the importance of bees and their role in maintaining the overall health of global agriculture and ecosystems through pollination.

After Be a Bee connected with the teams at Para La Naturaleza and The Bee Cause Project, the vision to create a bee sanctuary that would restore and preserve the island’s bee population was hatched. The sanctuary is located on a 2.6K acre nature preserve in Manatí, about an hour outside of the island’s capital of San Juan, a property maintained by Para La Naturaleza.

“Due to their genetics, behavior and natural resistance to parasites, Puerto Rico’s honey bees are unique in the world and could be a possible solution to global bee colony losses,” said Dr. Bert Rivera-Marchand, a tenured professor of biology at the Bayamón Campus of the Inter-American University of Puerto Rico and director of the EXITOS Project funded by the U.S. Department of Education. “With particular expertise on pollination ecology as well as the behavior and genetics of social insects including honeybees and ants, Rivera-Marchand will play a key role in developing the educational programming for the new sanctuary.

As the primary sponsor for the sanctuary project, Dixie Vodka has a long history of investing in efforts to support honey bee education and protection. In 2017, Dixie Vodka created its Wildflower Honey expression, made with sustainably sourced honey from Savannah Bee Company. In the process, founder Matti Anttila learned a great deal about honey bees, their plummeting populations, and the critical role they play in global agriculture. Ever since, Dixie Vodka has donated a portion of proceeds to The Bee Cause Project via its 1% for the Planet program.

“We’re thrilled to help support the creation of this new bee sanctuary in Puerto Rico, which is vitally important not only to the restoration of the island’s bee population, but also in terms of the education and awareness the sanctuary will provide to visitors around the state of honey bees on a worldwide scale,” said Anttila.

Following the grand opening in June, the bee sanctuary will be open to the public for guided and self-guided tours of the property. Para La Naturaleza, Be a Bee, Dr. Rivera-Marchand and The Bee Cause Project will work to develop educational programming and curriculum content, available in mid-August, for schools, community organizations and families to enjoy. Later in the fall, the sanctuary will host an open house event during which guests and the surrounding community will have the chance to meet representatives from the various organizations that brought the bee sanctuary to fruition and enjoy a honey harvest in celebration of the sanctuary’s first “crop” of honey.