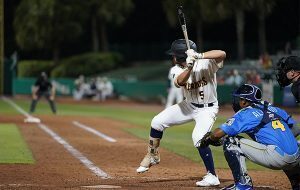 
The Down East Wood Ducks took a 1-0 lead over the Charleston RiverDogs on the first pitch of Tuesday night’s game at The Joe.  After that, it was all RiverDogs on the way to a 5-1 win in front of 2,507 fans in the opening game of the first ever series between the two teams.  The victory was the first for the RiverDogs after trailing at any point in a game.

Evan Carter opened the game by lining Jose Lopez’s first offering over the right field wall for his first home run of the season.  From that point forward, Lopez and two relievers held the Wood Ducks (9-4) scoreless and limited them to six additional hits, five of them singles.  Lopez earned the win by working 5.0 innings and scattering three hits.  Seth Johnson and Colby White combined to pitch 4.0 shutout innings out of the bullpen with eight strikeouts.

The offense gave the RiverDogs (8-5) the lead for good in the second inning.  Heriberto Hernandez reached on an error from shortstop Luisangel Acuna to open the inning and Nick Schnell followed with an infield single to put two on with no outs.  After a fly ball by Alika Williams moved Hernandez to third, Diego Infante scored him with a sacrifice fly to right field that tied the game.  Back-to-back walks loaded the bases for Brett Wisely and the leadoff hitter took advantage by lining a two-run single into shallow left for a 3-1 lead.

The RiverDogs added an insurance run in the immediate aftermath and another in the latter innings.  Schnell took the team lead with his 11th RBI via a sacrifice fly in the third.  Wisely added another run batted in to his total with an RBI groundout in the sixth.

The RiverDogs total of seven hits was spread evenly by seven different members of the lineup.  Wisely paced the team three runs batted in, while Hernandez and Infante each collected a double.

Tuesday night was all about the dogs, both on and off the field.  Fans were treated to a pre-game Dachshund parade through the seating bowl, a longest wiener dog contest and an intense race to see which pup could eat a glob of peanut butter the fastest.

The RiverDogs will host the Wood Ducks for the second game of the series on Wednesday night at 7:05 p.m. RHP Taj Bradley (0-1, 7.11) will take the ball first for the RiverDogs.  Down East will counter with RHP Wyatt Sparks (0-0, 8.53).  The RiverDogs will suit up as the Boiled Peanuts for the first time in 2021 on a Wicked Wednesday presented by Wicked Weed.

RiverDogs to Ramp Up Capacity at The Joe