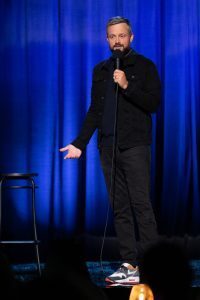 Coming off the success of his 2020 One Night Only Drive-In Tour, comedian Nate Bargatze announced today that his new The Raincheck Tour will come to the North Charleston Performing Arts Center on Friday, September 10th at 7 pm. Tickets will go on sale this Friday at 10 am.

Fresh off the release of his highly anticipated 2nd Netflix special, The Greatest Average American, now streaming worldwide, The Raincheck Tour will feature all new material.

Hailing from Old Hickory, Tennessee, Bargatze sells out shows across the world. His comedy is both clean and relatable, which is evident in his ten appearances on The Tonight Show Starring Jimmy Fallon following four appearances on Late Night with Conan O’Brien. In March 2019, Nate’s first solo one-hour Netflix special, The Tennessee Kid premiered globally with rave reviews.

In July 2020, the comedian teamed up with All Things Comedy to release his new podcast, Nateland. New episodes release Wednesdays, with video available on Nate’s YouTube channel and audio available everywhere you get podcasts.