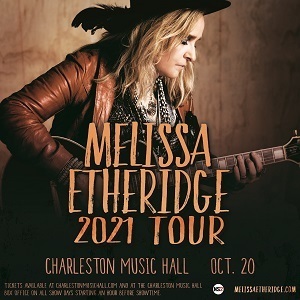 On Wednesday, October 20th, singer-songwriter Melissa Etheridge will perform at the Charleston Music Hall. The show starts at 8 pm.

Etheridge has been a staple on the U.S. charts for more than two decades. She’s won multiple awards including two Grammys and an Academy Award (Best Original Song) for “I Need to Wake Up,” written for the Al Gore documentary on global warming, An Inconvenient Truth. Her fourth album, 1993’s Yes I Am, featured the massive hits, “I’m the Only One” and “Come to My Window.”

In June 2020, Etheridge launched Etheridge TV, an independent channel built on the Maestro platform. She goes live five days a week for her fans, each day offering something different. That same month Etheridge also announced the launch of The Etheridge Foundation. Through the foundation, the singer hopes to raise money to support healthy new research into the causes and effects of opioid addiction. She wants to partner with and support organizations that delve into new ways of understanding and treating underlying mental health issues in conjunction with drug addiction. She hopes to find ways for people to seek treatment outside of pharmaceutical norms and find new answers and relief for those suffering from the devastating effects of addiction.

Tickets for the Charleston show are already on sale. Click here for more information.
–

Follow us
Related Topics:charleston music hallMelissa Etheridge
Up Next