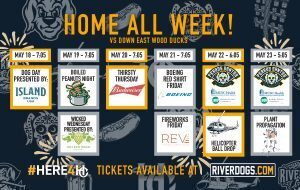 The Charleston RiverDogs will finish the first month of the season with plenty of baseball, laughs and fun for the entire family at The Joe. With back-to-back six-game series at home, the team has so much planned that the homestand had to be divided in half for entertainment purposes.

The first week will feature the 2021 debut of the Boiled Peanuts, a Perros Santos weekend and the first helicopter ball drop of the year. In addition, you can leave Sunday’s game with your very own house plant!

The RiverDogs will open the homestand by taking on the Down East Wood Ducks May 18-23 and finish it off by battling the Fayetteville Woodpeckers May 25-30. Here is everything that fans can look forward to next week during the first six of those games at The Joe:

Tuesday, May 18, 7:05 p.m.: Dog Day: Don’t leave them at home! Bring your four-legged friends to the ballpark for each and every Tuesday contest thanks to Island Coastal Lager, who encourage you to #TakeItEasy.  This week we’ll showcase Dachsunds! Highlights will include a Dachsund parade, canine costume contest and a dog trick competition. Tuesday games are presented by 96.9 the Wolf.

Wednesday, May 19, 7:05 p.m.: Boiled Peanuts/ Wicked Wednesday: The RiverDogs will take the field for the first time in 2021 as their alternate identity, the Boiled Peanuts!  The team will tip their sweetgrass caps to South Carolina’s official state snack by wearing dark green uniforms with a peanut pattern on the sleeves.   The cap features a peanut-patterned brim and the logo depicts a peanut relaxing in a boiling pot of water.  As is the case for every Wednesday at the ballpark, we will celebrate craft beer and throw in some wicked good fun thanks to Wicked Weed.

Thursday, May 20, 7:05 p.m.: Thirsty Thursday: It’s a Thursday night staple at The Joe with a twist in 2021.  No, we are not doing away with $1 beers.  Instead, we have made them available throughout The Joe on each  Budweiser Thirsty Thursday this season! That’s right, you can grab a $1 beer (or two) no matter where you are in the ballpark. Thursday games are presented by 95SX.

Friday, May 21, 7:05 p.m.: Fireworks/Red Shirt Friday:  The RiverDogs will close the work weeks with another fireworks spectacular presented by REV Federal Credit Union.  This week’s show will be set to your favorite country tunes.  It’s also a Boeing Red Shirt Friday where we invite you to wear red in support of those who serve our country.  The team will take part on the field, wearing special red jerseys.  Friday games are presented by 103.5 WEZL.

Saturday, May 22, 6:05 p.m.: Perros Santos Weekend/Helicopter Ball Drop: The RiverDogs will spend the weekend suiting up as Los Perros Santos de Charleston as part of Minor League Baseball’s Copa de la Diversión initiative.  Along with MUSC Health and Berkeley Electric Cooperative, we’ll celebrate the local Latin American culture with special uniforms, music and Spanish public address announcements. Our opponents, the Down East Wood Ducks, will join in on the fun, playing as Avocados Luchadores de Down East. Following the game, a helicopter will drop thousands of numbered bouncy balls onto the field.  If a ball lands on the target at home plate, the fan with the corresponding number will walk away with $1,000.  If no ball lands on the target, the nearest ball will be worth $500. Saturdays are presented by ABCNews4 and MyTV Charleston.

Sunday, May 23, 5:05 p.m.: Perros Santos Weekend/ Plant Propagation Party/Family Sunday:  The RiverDogs will finish off the weekend as Los Perros Santos de Charleston as part of Minor League Baseball’s Copa de la Diversión initiative.  Along with MUSC Health and Berkeley Electric Cooperative, we’ll celebrate the local Latin American culture with special uniforms, music and Spanish public address announcements. Also, make sure to build your own plant! This idea stems from our deep-rooted desire to let our fans leave a game with something living and breathing. We thought about dogs, cats, frogs and other creatures, but couldn’t make it work. The solution: we’ll give you a pot, soil and a houseplant clipping and you do the rest. A green-thumb is not a requirement, just water it and watch the growth begin. The kids will love watching the fruits of their labor.  The entire game experience will be directed toward children and fun for the entire family on an MUSC Health Family Sunday.  Sundays are presented by Charleston Radio Group.

The RiverDogs will be off on Monday, May 24 before hosting Fayetteville for six more home games beginning on May 25.  The full promotions schedule can be viewed here.

The entire RiverDogs gameday experience is cashless in 2021, including parking, the team store and concessions.  Fans who do not have credit or debit cards will be able to use cash to purchase gift cards at Fan Services on gamedays. All RiverDogs tickets for the 2021 season are available for purchase online and will be delivered digitally.  Once purchased, tickets can be printed at home or scanned on a phone.  For answers to frequently asked questions, fans are encouraged to visit the RiverDogs Digital Ticket Guide. Masks are required and no bags will allowed into the ballpark.

Rays Battle Back To Earn 4-2 Win In Jacksonville