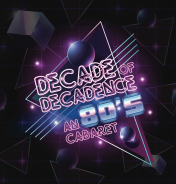 Fifteen months after their last live stage performance and after skipping the entirety of their 89th season, Footlight Players, Charleston’s oldest theatre company, is getting back to business with a couple of live music cabaret shows to launch their new Queen Street Cabaret series.

“We’re all starved for live performances both as artists and patrons, and after such a dramatic shift in the world over the past year, we’re all ready for some fun and escape – and that is exactly what we intend to provide,” said Brian Porter, Executive Director of Footlight Players and its home at the Queen Street Playhouse.

The Queen Street Cabaret series will launch with two different shows running in between May 29th and June 11th during the time of the Spoleto Festival. The first, Decade of Decadence: An 80’s Cabaret will feature a lineup of some of Charleston’s finest voices backed up by a live band belting out some of the greatest hits of the 80’s from Madonna and Whitney to the Eurythmics and Janet Jackson. A mixture of over the-top 80’s camp and some more intimate cabaret covers, the show, hosted by frequent Footlight  collaborator Kyle Barnette, pays reverent homage to the decade that never slept.

The series’ other show, Sondheim Nights, offers a more intimate affair of just voices and an accompanying piano celebrating one the greatest composer and lyricists in musical theatre history, Stephen Sondheim. Audiences will find themselves singing along to familiar tunes from some of Sondheim’s greatest accomplishments from Into the Woods, Company, Dick Tracy, Sweeney Todd, and much more while host and Executive Director Brian Porter will fill the audience in on tidbits and facts about Sondheim and his illustrious musical theatre career.

Footlight Players will also be announcing their full 90th season lineup the week of May 17th. Show dates and info are listed below:

Each performance will be held at the Queen Street Playhouse, home of the Footlight Players. Tickets and info: footlightplayers.net