A dramatic three-goal comeback set the stage for an overtime winning goal by Zach Malatesta to give the South Carolina Stingrays (26-20-10-3) a 5-4 win and a two-game sweep of the Indy Fuel (30-21-6-0) at the North Charleston Coliseum on Wednesday night.

Once again it was SC’s captain Andrew Cherniwchan who did the heavy lifting on offense, factoring in on the scoring of all three third period goals to bring his team back from a 4-1 deficit. Cherniwchan scored twice while adding an assist and now leads the team with 19 goals on the year.

Four other Rays’ skaters had multi-point nights, including Justin Florek and Max Novak who each scored a goal and an assist, as well as Matthew Weis (3 assists) and Caleb Herbert (two assists). 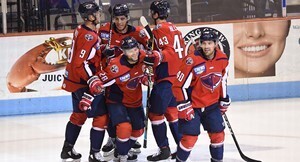 The Fuel got out in front first at 7:28 of the first on a power play goal by Willie Raskob that made it 1-0.

Novak tied the game later in the frame, scoring on a backhand redirect that beat Indy goaltender Dan Bakala up high to make it 1-1 at 13:40 from Cole Ully and Weis.

Nic Pierog responded for the Fuel at 15:44, scoring his first of two tallies on the night to give Indy a 2-1 lead at the first intermission.

The Fuel added two more tallies in the second to take a commanding 4-1 advantage. Diego Cuglietta had the first strike at 8:59, while Pierog netted his second of the game at 10:16.

But South Carolina came roaring back in the third to tie the game. Cherniwchan got things started in the final frame, redirecting a shot by Max Gottlieb past Bakala at 2:20 to make it 4-2. A second assist on the play was also credited to Weis.

Then Florek found the back of the net from point-blank range off a pass by Herbert for his 14th of the season at 7:59. The goal put the Rays within a goal of Indy at 4-3 and came with a second assist from Cherniwchan.

With less than six minutes to go in the game, Cherniwchan found the tying goal with his second strike of the night, a wrist shot that deflected past Bakala at 14:26 from Herbert and Florek.

The teams remained deadlocked at 4-4 for the remainder of regulation, with SC ending the third with a shots-on-goal advantage of 17-5 during the final 20 minutes.

At 3:23 of the extra session, Malatesta won a battle on the left-wing wall and took the puck to the net, using a backhand shot to slip the puck into the net for the winner. Assists on the final tally went to the other two skaters on the ice at the time for SC, Novak and Weis.

Both teams scored on the power play in the contest, with SC finishing 1-for-7 while Indy ended at 1-for-2. Goaltender Alex Dubeau earned the victory in net for the Rays, stopping 23 shots to claim his 15th win of the season. Bakala took the loss for the Fuel, turning aside 38 shots in defeat. South Carolina had the edge in shots on goal during the game by a 43-27 margin.

The Stingrays return to action this weekend in Jacksonville for a two-game set with the Icemen on Friday and Saturday night. Both contests are scheduled to begin at 7 p.m. South Carolina will be back at the North Charleston Coliseum to host the Greenville Swamp Rabbits on Wednesday, May 26 at 7:05 p.m.

Columbia’s Bats Too Much for RiverDogs in 12-4 Loss

RiverDogs Come Up Short in First Road Game of Season

Happening this August at Brookgreen Gardens

Miller Gallery to Celebrate the Opening of “Unbroken” on August 7th

What’s Happening this August at the Gibbes Museum of Art