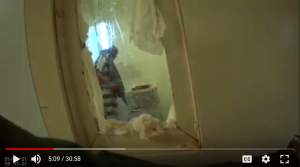 The Charleston County Sheriff’s Office on Thursday night released video of the in-custody death of Jamal Sutherland. Holy City Sinner was sent the many hours worth of video and is working to get it uploaded.

Sutherland was being treated at Palmetto Lowcountry Behavioral Health on January 4th, but was arrested after taking part in a fight with other patients and staff. He was charged with third-degree assault and battery and booked into jail. A SLED investigation found that Sutherland “became unresponsive and died” the next day while officials were attempting to remove him from his jail cell for a bond hearing. Potential criminal charges related to Sutherland’s death will be decided before the end of June, Ninth Judicial Circuit solicitor Scarlett Wilson said on Tuesday.

“I have deferred to the family’s wishes to keep the video private until  they were ready, and they have now asked me to release the jail footage of their son, Jamal Sutherland. I am directing the immediate release of all videos related to his death in their entirety. We agree it is clearly time for the public to view what happened.

I will continue to make myself available to the Sutherland family and offer my sincere condolences. I must respect the integrity of the ongoing investigations to ensure justice is served, and therefore I will not be commenting on specific aspects of the video.

What occurred on Jan. 5, 2021, was a horrible tragedy. Our officers removed Mr. Sutherland from his cell that morning in order to ensure that he received a timely bond hearing, as required  by law. Their efforts were complicated by the increasing effects that Mr. Sutherland was suffering as a result of mental illness. This unfortunate tragedy has revealed an opportunity to  review existing policies. Similarly, we are looking at ways to improve safety for our staff  members and the residents of our detention center.

Since this tragedy occurred, we have assessed our resources and are evaluating options for global improvement, including a focus on mental health awareness. In my career as a law enforcement professional, I have seen my fellow officers take on mental health responsibilities that they are not equipped to handle. This must be changed, and I am committed to implementing that change. These are systemic issues that our nation is facing on a daily basis.

As sheriff, I regret that this occurred. I will continue to work with our judicial system, health care  professionals, and community to ensure we are continually improving our processes and  promoting the safety of all our residents and staff. This will require a lot of work, and we will  continue to engage our community in conversations around these topics.”

#Breaking Body cam video of the death of Jamal Sutherland in custody as shown on the 11PM @Live5News Please understand this video is disturbing and only part of the hours we received. #chsnews @Live5News pic.twitter.com/aUY76IsPb4

This is another angle of the clip @thomasdgruel shared. This is body camera footage and is *very disturbing*, so watch with caution. This is only a clip of the many hours provided by CCSO. More will be released. #chsnews #JamalSutherland pic.twitter.com/UmPZUimyDc