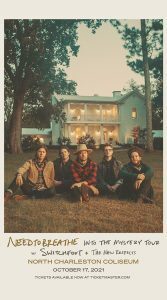 Local rock band NEEDTOBREATHE will bring their “Into the Mystery” tour with special guests Switchfoot and The New Respects to the North Charleston Coliseum on October 17th. Tickets go on sale Friday, May 14 at noon.


The headliners have released seven studio albums including 2020’s Out of Body, which peaked at No. 17 on the Billboard 200 chart. NEEDTOBREATHE’s eight album, Into the Mystery, will be released this year. A music video for the record’s title track can be seen below.

Switchfoot is a rock band best known for the hit singles its “Meant to Live” and “Dare You to Move” off their edouble platinum 2003 album The Beautiful Letdown.

The New Respects are a Nashville-based band whose most recent release was their debut full-length, Before The Sun Goes Down.

To purchase tickets to the North Charleston show, click here. Doors will open at 6 pm. Parking is $10.
–

Follow us
Related Topics:NEEDTOBREATHEnorth charleston coliseumSwitchfootThe New Respects
Up Next

WestEdge Day Set for May 22nd