ESTERO, Fla. – The Florida Everblades (34-17-2-2) came out on top 6-5 in overtime Friday night at Hertz Arena, defeating the South Carolina Stingrays (24-19-10-3) on a breakaway goal by their captain John McCarron at 1:08 of the extra session after a wild end to regulation that saw both teams score in the final minute of play.

South Carolina’s captain Andrew Cherniwchan led his team in defeat, scoring twice and adding an assist, while Brett Supinski had a goal and an assist for the second straight game and Mark Cooper picked up two helpers. 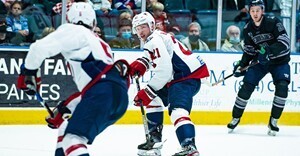 The contest was the second straight between the teams to need overtime this week after the Rays came away with a 3-2 decision on Wednesday.

Florida got the scoring started at 6:42 of the opening period when Hugo Roy beat SC goaltender Alex Dubeau to make it 1-0.

Cherniwchan tied it just over a minute later for the Stingrays, slipping a shot past Florida netminder Jake Hildebrand at 7:48. The Hinton, Alberta native’s 15th of the season came from Matthew Weis and Supinski and sent the teams into the first intermission even at 1-1.

SC then scored twice in the second to take a commanding 3-1 lead after 40 minutes. First, defender Tariq Hammond found the back of the net off a pass by Dan DeSalvo for his first goal of the year at 7:23. Then Cherniwchan extended the advantage with his second of the night on the power play from Caleb Herbert and Cooper at 11:57.

But Florida didn’t go quietly in the third, scoring three consecutive even-strength goals to retake the lead at 4-3. Alex Kile had two of the tallies for the Everblades at 7:21 and 14:10, while Blake Winiecki found the back of the net off the rush at 13:26.

A penalty to Florida defender Colby Sissons for cross-checking at 15:33 sparked a fight between Florida’s Cody Sol and South Carolina’s Zach Malatesta that rejuvenated the Rays.

Just a second after the penalty expired, defender Tyler Nanne blasted a shot from the right point past Hildebrand to tie the game up at 4-4 with just 2:26 remaining in the third. Assists on the goal went to Cherniwchan and forward Dylan Steman.

With under a minute to play, SC re-took the lead at 5-4 when Cooper found Supinski in the slot for a perfectly placed shot that went into the top left corner of the Florida net with 29 seconds remaining. As the final seconds ticked down, the Everblades got a tying goal from Myles Powell just before the buzzer with one second left on the clock to force overtime at 5-5.

After an overtime shot attempt by Weis got blocked at the top of the zone, McCarron moved in on the breakaway and beat Dubeau with a backhand shot up high to give Florida the extra point from the contest.

South Carolina scored the lone power play goal of the game, finishing 1-for-4 on the man-advantage while holding the Everblades scoreless on the power play at 0-for-3. Dubeau was busy in the crease all night, stopping 40 shots for the Rays in a losing effort while Hildebrand made 21 saves to pick up the victory for Florida. The Everblades had a 46-26 edge in shots on goal.

The Stingrays conclude their 3-game series at Hertz Arena on Saturday night at 7 p.m. and then return home to face the Indy Fuel at the North Charleston Coliseum on Tuesday and Wednesday at 7:05.