Stingrays’ goals came from forwards Mark Cooper and Dan DeSalvo, while goaltender Matt Jurusik made 23 saves and Matthew Weis extended his point streak to seven games with an assist. 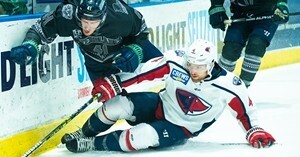 The Everblades took the lead right from the start, scoring on the first shot of the game by Cole Sanford just 20 seconds into the contest to make it 1-0.

In the middle period, DeSalvo moved through the defense on the power play and beat goaltender Jake Hildebrand for his 15th goal of the season at 3:23 of the second to tie the game at 1-1. Weis and Supinski earned helpers on the man-advantage tally.

Later in the frame, defender Blake Hillman let a shot go from the left wall that was deflected in by Cooper for his eighth of the year, securing the Rays a 2-1 lead at 9:58. A second assist on the goal went to forward Dylan Steman

The Everblades secured the deciding goal at 7:28 of the third period on a redirect by Stefan Leblanc. SC had multiple chances late, including a shot that rang off the post in the final seconds, but were unable to find an equalizer.

South Carolina had the advantage on special teams, scoring the only power play goal of the night (1-for-6) while holding Florida to an 0-for-2 mark on the man-advantage. Hildebrand earned the win for the Everblades by making 38 saves on the 40 chances put on net by SC.

The Stingrays return home to face the Indy Fuel at the North Charleston Coliseum on Tuesday and Wednesday evening, with both contests beginning at 7:05 p.m.