Player, a nine-time major champion, was paired with Kelley, a 5-time Grammy winner, to take on Faldo, who won the Masters and the Open Championship three times each, and Bryan in a promotional match that jump-started the $18 for 18 campaign on April 29. 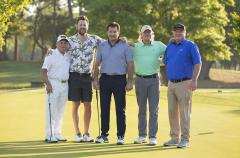 While the match wasn’t open to the public, military veterans who have participated in Project Golf’s “Introduction to the Game” series, juniors and Dunes Club members were on hand to enjoy the fun on a sun-splashed day.

“It was just a fun day raising money for charity and a great cause,” said Kelley. “It’s awesome. I mean, that’s what we’re here for. That’s what it’s all about – just growing the game, making it more accessible and I love it.”

Project Golf is dedicated to providing new players a path to sustained enjoyment of the game, bringing people to the sport for a lifetime. Project Golf hosts clinics for juniors, military veterans, and anyone with an interest in taking up the sport.

Each series of clinics lasts six weeks and helps introduce players to the game in a supportive environment that teaches participants everything from how to book a tee time to golf course etiquette and swing fundamentals. Most importantly, Project Golf connects new players with people of similar ability levels, allowing them to find playing partners they are immediately comfortable with. Crucially, the organization also follows up with players after their initial series of clinics are over, helping encourage them to stay connected to the game.