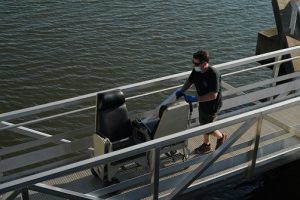 Multiple artifacts from the Patriots Point Naval & Maritime Museum collection will play a role in the upcoming feature film Devotion. More than a dozen Ready Room chairs, a Captain’s chair, and sinks from aboard the USS Yorktown were borrowed from the museum to provide a historically accurate set in the movie production.

Devotion completed an extensive restoration of the nearly 80-year-old chairs, including cleaning, painting, and making new cushions for the backrests and seats. The artifacts were returned to the museum in April and visitors will soon see the chairs re-incorporated into existing exhibits.

“We are very thankful to the Devotion team for restoring our chairs to their original glory,” said Museum Curator Melissa Buchanan. “Restorations of this extent can cost thousands of dollars per chair. Because of this project, these chairs will be around for another generation to learn from and enjoy.”

Devotion tells the story of two naval pilots – the first African-American Naval Aviator Jesse Brown and Medal of Honor Recipient Tom Hudner. The movie highlights their friendship and experiences during the Korean War. While on a mission, Brown’s plane was shot down and crashed on a remote mountaintop. Hudner intentionally crashed his own aircraft in an attempt to rescue his friend. The lead cast includes Jonathan Majors and Glen Powell.

While the Devotion crew is unable to reveal which specific scenes feature the chairs, producers say the Ready Room chairs were used in multiple days of filming and will be seen clearly in the movie. Devotion is expected to premiere in 2022.

At Patriots Point, visitors can explore Korean War history, and ships and planes like those featured in the film. Brown and Hudner were assigned to the USS Leyte (CV-32), an Essex class carrier similar to the USS Yorktown (CV-10). On the Hangar Deck, visitors will find an F4U Corsair plane, the same type of aircraft Brown flew during the mission featured in Devotion.