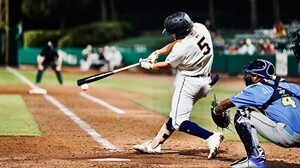 Brett Wisely and four members of the pitching staff made sure that the long-anticipated return of the Charleston RiverDogs was worth the wait. Wisely hit a pair of solo home runs and the pitching staff combined to collect 15 strikeouts in a 6-3 win over the Myrtle Beach Pelicans on Tuesday night at Joseph P. Riley, Jr. Park.

The RiverDogs first six hitters of the game were retired in order by Myrtle Beach starting pitcher Manuel Espinoza before Wisely turned on a fastball and drove it over the right field wall for a 1-0 lead. Abiezel Ramirez followed with an infield single and Alika Williams added a ground rule double to put a pair of runners in scoring position for Nick Schnell. The former first round pick jumped on the first pitch of his at bat and ripped a two-run double into the gap to extend the lead to 3-0. Before the inning ended, Myrtle Beach (0-1) first baseman Ryan Reynolds dropped an infield pop up, allowing two additional runs to score and increasing the margin to 5-0.

After RiverDogs (1-0) starter John Doxakis departed the game, Myrtle Beach put together a rally in the fifth. Pablo Aliendo opened the inning with a double to right field and was joined on base by Edmund Americaan, who legged out a bunt base hit. Darius Hill drove in both runners with a double of his own. Later in the frame, Ed Howard trimmed the Charleston lead to 5-3 by driving in Hill with an RBI single.

The final damage of the night was done by Wisely once more, in the sixth. With one out, the second baseman lined another home run to the same part of the ballpark off of reliever Blake Whitney to extend the advantage to 6-3. Wisely finished the 2019 season with five home runs in 47 games at Princeton.

With the lead pushed back to three, the tandem of Brayden Theriot and Colby White shut the door on any hopes of a Pelicans comeback with dominant performances out of the pen. Theriot allowed one hit in 2.0 innings with three strikeouts and White struck out four over a pair of scoreless frames. In total, the four RiverDogs pitchers tallied 15 strikeouts and walked one batter. Charleston hitters struck out just three times against Pelicans pitching.

The series resumes quickly with a 12:05 p.m. first pitch on Wednesday afternoon. RHP Cole Wilcox will toe the rubber in his professional debut for the RiverDogs in a match-up with Myrtle Beach LHP Adam Laskey. The RiverDogs will play as Los Perros Santos and Myrtle Beach will suit up as Los Pelicanos on Cinco de Mayo as part of MiLB’s Copa de la Diversión initiative. We’ll also celebrate craft beers on a Wicked Wednesday at the ballpark presented by Wicked Weed.