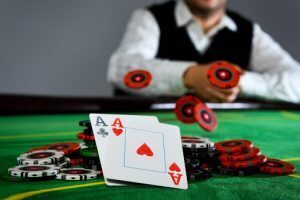 Poker is one of the few casino games that requires skill. It is actually a very complex game and it doesn’t only require a high IQ but also emotional intelligence, bankroll management, self-control, memory, strategy and more. Poker is a big deal and for those who are into it, a poker tournament can be as exciting as a football or hockey tournament. For top performers, the prizes can also be very rewarding as similarly to professional sports, professional poker can make you rich!

In this piece, we are going to look at some of the biggest names in poker’s history. Our list of 10 poker kings includes past and current poker stars some of whom are men and some women. Carlos Norberg, a Swedish iGaming expert who knows the poker industry inside and out, helped us point out the big names. To find out more about Carlos, click here.

Johnny Moss – the Grandfather of Poker

Born in 1907 in Texas, most of his life Moss was a Texas road gambler. He played on the road and no one knows how much cash he had won during his life. He was the first-ever winner of the World Series of Poker (WSOP) Main Event (in 1970). In 1971, a tournament format was introduced and Moss won it that year, as well as in 1974. He was inducted into the Poker Hall of Fame in 1979.

You don’t have to spend your life on the road to find poker games and cash in some money. You can easily play in one of the online casinon that you will find following the previous link.

Brunson is one of the most recognised players in poker as his cash games have been on tv many times. His tournament earnings total $6.2 but his cash games winnings are even a lot higher than this figure. Brunson is a 10-time World Series of Poker bracelet winner, including the WSOP Main Event twice. Even at 84 years of age, he made it to the WSOP final table. He is the acclaimed author of a poker strategy book called Super System: A Course in Power Poker.

This genius poker player has a tragic life and there was a movie made about his story, called High Roller: The Stu Ungar Story. Started gambling at age ten, he was originally a gin rummy player, he later changed to poker. Ungar won the WSOP Main Event three times. He has had problems with cocaine addiction and was found dead in a cheap Las Vegas hotel room in 1998. Even though he won $3.7 million in tournament winnings, he died as a poor man. In 2001 he was posthumously inducted into the Poker Hall of Fame.

The Canadian professional poker player has won over $40 million in live tournament winnings so far. He is one of the famous poker players of the modern age, as he became known in the new poker era, in the mid-2000s. He was a PokerStars ambassador for over 10 years and he won five WSOP bracelets and two WPT titles.

Just like Negreanu, Ivey is also a modern era poker player. He became famous in the 2000s when he was repeatedly invited to high-stakes, televised games. Paparazzi seem to follow him as he has become the target of gossip for his mysterious behaviour. Ivey has won $20 million in online Full Tilt poker and has won 10 WSOP bracelets.

Phil Hellmuth is the winner of 15 WSOP bracelets and over $23 million in tournament winnings. He is a brilliant player and the author of several books. In 1989 he won the WSOP Main Event as a 24-year-old and he is still on tv today playing poker better than ever.

888Poker Ambassador Martin Jacobson is the only Swedish poker player who won the World Series of Poker Main Event. In this tournament in  2014, he won $10 million. His total tournament winnings exceed $16.6 million and he has significant online poker achievements as well. Martin is number 1 on the Swedish All Time Money List and aged 33 we expect to see him succeed more in the future.

Vanessa emerged at the height of the poker boom. She came 7th in 2006 at the WPT Five-Star World Poker Classic winning $263,625. She is one of the most successful female poker players and she has won $3.5 million in tournaments.

Selbst is considered the best female poker player ever by many. Her professional poker career began in the mid-2000s and by now she has made $12 million in career earnings. Her biggest win was in 2010 at the Partouche Poker Tour Cannes Main Event, when she won €1,3 million.

Duke is one of the most successful female players of all times. She made $4.3 million in live tournament winnings and she won the 10th-place in the WSOP Main Event in 2000. She won another WSOP bracelet in 2004 and cashed in $137,860. She left the world of poker in 2011 and is now a corporate speaker and strategist.

As you could see from our list you cannot be too young or too old to win at poker. The above ladies and gents all made a lot of money playing and are all legends in the world of poker.

7 Great Activities to Bring The Family Together This Summer