ORLANDO, Fla. – A third period breakaway goal by Michael Joly broke a tie halfway through the third period and gave the Orlando Solar Bears (29-21-4-1) a 3-2 decision Monday night, narrowly avoiding a sweep by the South Carolina Stingrays (23-19-9-3) in the teams’ three-game series this week at the Amway Center.

The Rays got goals from forwards Andrew Cherniwchan and Caleb Herbert in the second period, while goaltender Matt Jurusik got the start and turned aside 29 shots for SC in a losing effort. 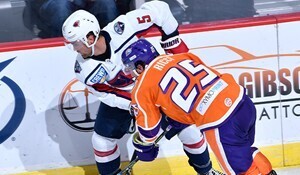 Orlando secured the initial advantage when Aaron Luchuk netted the opening goal of the game at 18:43 of the first period.

South Carolina responded in the second when Cherniwchan knocked a puck past goaltender Clint Windsor from the slot to tie the game at 1-1 after linemate Justin Florek moved it to him from the right wall. The goal, which came at 6:17 of the middle frame, had a second assist credited to defender Connor Moore.

The Solar Bears got back on top 2-1 when Anthony Repaci beat Jurusik on a play in front of the crease at 13:49 of the second.

Before the end of the frame, Caleb Herbert stuck with a bouncing puck at the side of the Orlando net and forced it past Windsor to even things again at 2-2. Herbert’s eighth tally of the season came at 18:09 from forward Matthew Weis as well as Cherniwchan.

But the Solar Bears had the only tally of the third at 11:04 when Joly got past SC’s defense and beat Jurusik on the breakaway to the glove side.

The Stingrays were unable to find a late equalizer and failed to extend their fourth three-game winning streak of the 2020-21 season.

Neither team was able to strike on the man-advantage during the contest, with Orlando finishing at 0-for-3 while SC ended at 0-for-4. Windsor picked up the victory for the Solar Bears in the crease, stopping 24 Stingrays shots. Orlando held the edge in shots-on-goal for the game, 32-26.

The Stingrays continue their road trip on Wednesday in Estero, Florida for the first of three battles against the Florida Everblades this week at 7:30 p.m.