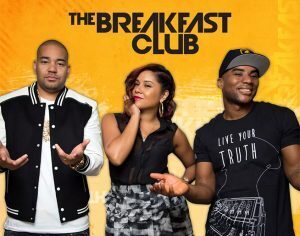 Cumulus Media announced that Z93 JAMZ/WWWZ-FM and Magic 107.3/WMGL-FM in Charleston now have a new morning lineup. Today, Z93 JAMZ kicked off the week with its new morning show, The Breakfast Club, featuring the Lowcountry’s own Charlamagne Tha God.

Charlamagne hails from Moncks Corner and began his successful radio career at Z93 JAMZ as an intern. The Breakfast Club will air on Z93 JAMZ Monday through Friday from 6 am – 10 am. The show replaces The Rickey Smiley Morning Show, which moves from Mornings on Z93 JAMZ to its new morning home at sister station Magic 107.3/WMGL-FM. The Rickey Smiley Morning Show airs on Magic 107.3 weekdays from 6 am – 10 am.

Consistently ranked #1, The Breakfast Club, “The World’s Most Dangerous Morning Show,” features hosts DJ Envy, Angela Yee, and Charlamagne. Launched in December 2010, The Breakfast Club has been named the No. 1 radio program in the nation by “The Source” magazine on multiple occasions and was inducted into the Radio Hall of Fame in October 2020. The show is nationally syndicated by Premiere Networks.

Biergarten Backstreet’s Back After Brunch Party