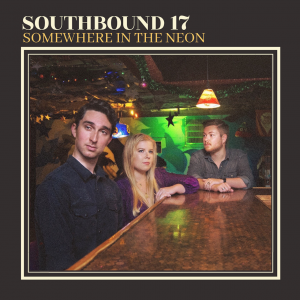 Local Country trio Southbound 17 on Thursday released their new EP, Somewhere in the Neon. The new record is a follow-up to their 2017 self-titled EP.

“On our first EP, it was just the three of us and our instruments,” said founding band member Jack Austen. “This time we got to collaborate with session musicians in Nashville and they brought a whole new life to this album.”

The band said Somewhere in the Neon consists of five tracks that each tell a different story, but are tied together with an East Coast Western style. It opens with the title track, a bar room ode to what could have been. Next is the group’s current single “No Vacancy,” which is the song featured in their Lumineers style road trip music video they released late last year. Other stand out tracks include the feuding duet “Takin’ Shots” and the ballad “The Moon, the Stars, & You.”

“Starting out, people often called us a bluegrass band,”  said Austen. “We have a banjo and a mandolin, but we have never really played that style of music. It’s more of an amalgamation of things like Country, Bluegrass, Americana and more. Now when people ask us about our style of music, I can say it’s the sound of this album.”

The album is available on Spotify, Apple Music, and everywhere you listen to music.
–