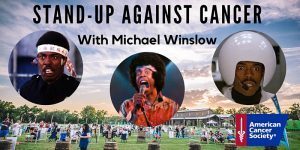 The legendary Michael Winslow from the Police Academy movies will headline Stand-up Against Cancer, a comedy show benefiting the American Cancer Society, at the Firefly Distillery on Friday, May 14th at 6 pm.
–


Winslow is a well-known master of vocal gymnastics and can imitate over 1,000 sound effects using his voice alone. Whether he is recreating the frenzy of Jimmy Hendrix playing the guitar, or the roar of a jet plane, his talent is truly remarkable and enjoyable for all ages.

Besides the Police Academy films, Winslow appeared in the comedy classic Spaceballs and voiced Stripe, the evil little creature from Gremlins. He also did voice-overs for Disney and Universal Studios in such rides as “Back to the Future ” and “Terminator.” Currently you can also hear him in the television hits Robot Chicken and Family Guy.

The show is produced and hosted by Charleston local comedian Keith Dee, and will include the very funny Mike Elis, who is producing a documentary series with Winslow as they travel around the country performing comedy in historical theaters.

Guests can bring a blanket or lawn chair to the show, and spread out on the distillery’s lawn in front of the amphitheater stage. Doors open at 5 pm for the show area. To purchase tickets, click here. $10 of every ticket sold will benefit the local Charleston chapter of American Cancer Society, Relay for Life of Charleston, SC.