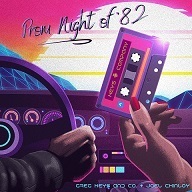 Charleston-based group Greg Keys & Company is releasing a new single alongside Midnight City’s Joel Chinloy on May 7th. The new song, Prom Night of ’82, is described by the group as a “80’s Pop Synth jam with tons of amazing elements.”

This single will be his first release of many by this new group, and will have a release party held at Uptown Social on May 9th starting at 4 pm.

You can learn more about keysandcomusic.com.