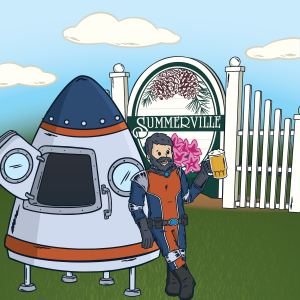 Frothy Beard Brewing Company today announced that it would be opening up a second taproom and kitchen in Summerville. The West Ashley brewery acquired Homegrown Brewhouse on the Summerville square and will be converting it into “a space-themed colony named Frothy Beard Off World.”

The new taproom and kitchen is projected to open in mid-June. Until then, the establishment will continue operating has Homegrown Brewhouse.

Frothy Beard Off World will be a family-friendly experience with food and drinks for everyone. It will be open for lunch Friday through Sunday, dinner every night of the week, and will have a special Sunday brunch menu. The new location will also be used to create special small batch beers in rotation with all the flagship Frothy brews fans are already familiar with.

The new Frothy Beard location will be found at 117 S. Main Street.

With the goal of building a new Frothy Beard colony, Finn recently blasted off from his brewery headquarters in the West…

Follow us
Related Topics:Frothy Beard Off Worldsummervillethe frothy beard brewing company
Up Next