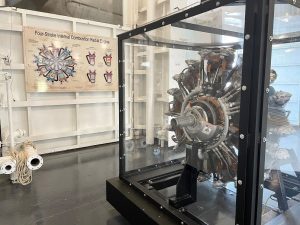 A new exhibit at Patriots Point Naval & Maritime Museum teaches visitors how World War II airplanes work. The Radial Engine Exhibit opened in April and features a working model of an internal combustion engine. Guests can push a button and watch the four-stroke cycle (intake, compression, combustion, and exhaust) take place before their eyes. This same process was used for propulsion of the World War II aircraft on display aboard the USS Yorktown, like the F4F Wildcat.

The exhibit was purchased for the museum by the USS Yorktown Foundation. It explains the history of the engine and the science behind how it works. Children who visit will recognize concepts related to force and motion that they learn in school. The new addition also demonstrates the evolution of technology. On the Hangar Deck, guests can view the internal combustion engine and the airplanes that used it. They can also find the next step in engine development when viewing the General Electric I-16 display, which is the first turbojet produced in quantity in the United States.

“It’s one thing to read about the concept of an internal combustion engine in a science book,” said Director of Education Keith Grybowski. “But it’s another to see behind the steel as the engine is actually at work. We hope this hands-on exhibit will help all visitors better understand the four-stroke cycle and how engines like this one impacted our country’s history in flight.”

The new exhibit can be found on the USS Yorktown’s Hangar Deck. Patriots Point plans to use the model in future education programs when student groups visit the museum. This exhibit is included in the price of admission.

Mex 1 Announces Cinco de Mayo Plans for Each Location, Including a Block Party in West Ashley