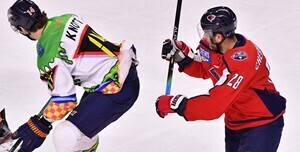 Zach Malatesta scored his sixth goal of the season at 1:06 of overtime to give the South Carolina Stingrays (21-18-9-3) a 3-2 win on the road over the Greenville Swamp Rabbits (25-15-10-3) Sunday afternoon at the Bon Secours Wellness Arena.

Stingrays’ forward Cole Ully had a goal and an assist in the contest to reach 45 points overall on the season, while goaltender Alex Dubeau made 21 saves to earn his 10th win of the year.

Greenville led 1-0 after the first on a strike by Graham Knott at 3:47 of the opening period.

Ully evened things up at 1-1 in the second, scoring on the power play from defender Max Gottlieb at 8:58.

Later in the frame at 12:07, defender Tyler Nanne gave SC a 2-1 advantage with his second goal of the season by blasting a one-timer by goaltender Ryan Bednard. The lone assist on the play was credited to forward Matthew Weis.

But the Swamp Rabbits picked up an equalizer less than two minutes later at 14:00 when Ryan Strome redirected a puck past Dubeau to tie the game at 2-2.

Neither team was able to score during the third period, which saw the Rays outshoot Greenville 11-7.

Malatesta sent the team back to the Lowcountry with two points, scoring his sixth goal of the season and giving SC their first overtime victory of the 2020-21 year. Assists on the winner were credited to Ully and Gottlieb.

The Stingrays converted the only power play goal of the game, going 1-for-3 while holding the Swamp Rabbits to 0-for-3 on the man-advantage. Bednard turned aside 23 shots for Greenville in a losing effort. SC outshot the Swamp Rabbits by a 26-23 margin in the contest.

Next week South Carolina heads to the Sunshine State for three games against the Orlando Solar Bears, beginning Friday night at 7 p.m.