Liam Pecararo scored twice in the third period to push the visiting Greenville Swamp Rabbits (24-15-9-3) past the South Carolina Stingrays (20-17-9-3) by a 4-2 score on Friday night at the North Charleston Coliseum. 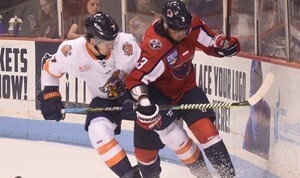 Both Stingrays goals were scored in the second period by linemates Justin Florek and Andrew Cherniwchan, while goaltender Alex Dubeau got the start and made 31 saves in a losing effort.

Max Zimmer put Greenville on the board first with a strike at 9:54 of the opening period to make it 1-0.

Florek tied the game up at 1-1 with his 12th goal of the year off an odd-man rush at 4:53 of the middle frame. The veteran scored on a wrist shot that beat Greenville goaltender Ryan Bednard blocker side with assists from Cherniwchan and defender Zach Malatesta.

The Swamp Rabbits took the lead back when Patrick Bajkov scored on the power play at 9:47 of the second to make it 2-1.

But Chernwichan responded with a power play goal of his own for SC to tie things back up at 2-2, netting his 11th of the year on a goal-mouth scramble at 11:44 from forwards Brett Supinski and Caleb Herbert.

The game remained even into the third before Pecararo put Greenville in front for good with a power play goal at 4:16 and then sealed the victory for the Swamp Rabbits on an unassisted empty net goal at 18:55.

Greenville has now won eight of the 12 meetings between the two clubs during the 2020-21 season.

The Swamp Rabbits controlled the shots-on-goal margin 35-25 and finished 2-for-7 on the power play in the contest, while SC ended at 1-for-4. Bednard picked up his ECHL league-leading 19th win with 23 saves in the game.

The two teams will continue their weekend 3-in-3 series on Saturday night a the North Charleston Coliseum for Nickelodeon Rugrats Night beginning at 6:05 p.m.