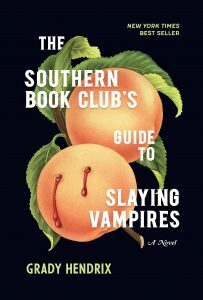 
If you have not had the pleasure of reading author Grady Hendrix, you are in for a treat.

I first stumbled upon Hendrix’s writing in 2016 with My Best Friend’s Exorcism. I was lured in by Hendrix’s ability to perfect the perfect blend of anxiety-inducing horror and aesthetic camp, which quite literally had me laughing out loud.

Hendrix could be classified as an acquired taste, similar to having the palate for caviar or reading about cannibalistic rats that attack your mother-in-law.  He is not for the faint of heart. Still, in his latest novel, The Southern Book Club’s Guide To Slaying Vampires, those that might not normally gravitate to the supernatural or macabre, will find this book hard to put down.

The novel takes place in Mt. Pleasant, the Old Village specifically. Hendrix is Charleston native, and his first-hand experience effortlessly paints a picture of what this idyllic community resembled in the late ’80s to mid-’90s.

The main character in this story is Patricia Campell, a dedicated mother who is both equally endearing and frustrating to watch navigate her traditional role as a stay-at-home mother. She has recently found a sort of solace and joy separate from her wifely and motherly duties within a new group of friends who have formed a book club. This is not the type of benign book club you may be anticipating as this group of women is interested in reading about serial killers and true crime. When I say their commentary on these killers is nothing short of hysterical, I promise you it does not disappoint.

Hendrix shines in many aspects of his writing, but what I have always found most enjoyable about his books are his vivid dialogue and humor. Each of these southern women takes center stage, and their personalities practically jump off the page.  I mean, with names like Slick, Kitty, and Maryellen, how could they not?

The men throughout the story exist more on the periphery (though they certainly insert themselves, annoyingly so). However, one essential character, James Harris, enters Patricia’s life and the community early on. He is a mysterious drifter that has recently made the Old Village home. Hendrix purposefully concentrates and focuses mainly on the experiences of the women and mothers within this story. As he highlights in his author’s note, mothers can often be underestimated and reduced to carpool organizers and casserole creators. This book takes you behind the scenes of these women’s sacrifices and the emotional labor that mothers often endure that can be oblivious to those on the outside.

As the story unfolds, James Harris eerily and seamlessly inserts himself within this community without  (initially) garnering much suspicion. The senile and arguably psychic mother-in-law seems to sense danger looming over the Old Village before anyone else. Then there are standout characters like Ms. Greene, an integral part of the women’s lives.  She is initially introduced as a caregiver, but as her character evolves and develops, she becomes the moral compass and mirror that guides the more significant and serious social issues.

I’m hesitant to give too much away because I’m confident most readers will be hooked within the first thirty seconds. Though campy and humorous, this book broaches topics such as racial inequality, racial bias within communities, misogyny, and the patriarchy. As we know, these issues are not isolated to years past, they are still very much unfolding in real-time and not only deserve our attention, but are also necessary to address.

Hendrix has an uncanny ability to weave these important topics between the supernatural, suspense, and cleverly dark humor.

“The Summer of Lost & Found,” An Ideal Seasonal Read

‘Everything Will Be Okay’ Sets Positive Tone For Young Women