Florek, Weis Score for SC in 3-2 Overtime Loss to Jacksonville

Matthew Weis scored to force overtime late in the third with an extra attacker on the ice, but the South Carolina Stingrays (20-16-9-3) ultimately fell in the extra session to the visiting Jacksonville Icemen (22-19-3-3) by a final score of 3-2 on Wednesday night at the North Charleston Coliseum.

Weis and forward Justin Florek found the back of the net for the Rays in defeat, while goaltender Matt Jurusik got the start and stopped 31 shots in a losing effort.

The Rays opened a 1-0 lead at 12:25 of the first when Caleb Herbert won a face-off right to Florek, who quickly took a shot that beat goaltender Charles Williams over his left shoulder. The strike was Florek’s 11th of the season and SC was able to hold the early lead into the first intermission. 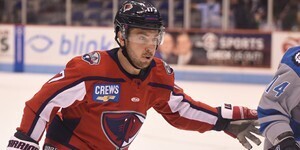 Jacksonville evened the game early in the second when Pascal Aquin pushed the puck past the goal line at 1:34 of the middle period to make it 1-1.

After the contest remained even for the remainder of the second frame, the Icemen took their first lead of the night at 2-1 just 15 seconds into the third on a goal by Craig Martin.

South Carolina found their equalizer to force overtime with just 1:12 to play when Weis came onto the ice as the extra attacker with an empty net at the other end and scored his fourth goal of the season to make it 2-2. Assists on the late tying goal went to forwards Andrew Cherniwchan and Cole Ully.

But just 23 seconds into the extra session, SC forward Dan DeSalvo was whistled for interference, giving Jacksonville a 4-on-3 man-advantage. It was not long before the Icemen scored the game winner, beating Jurusik on a deflection in front of the net by Wacey Rabbit.

The overtime goal was the only special teams marker in the contest as Jacksonville finished 1-for-5 while the Stingrays ended at 0-for-5. The Icemen outshot SC 34-31 in the game, with Williams turning aside 29 shots to earn the win.

South Carolina is back on the North Charleston Coliseum ice to face the Greenville Swamp Rabbits Friday night at 7:05 p.m. The two teams will also play on Saturday night at 6:05 for Nickelodeon Rugrats Night at the Coliseum.

Rabbits Get Past Rays In Series Opener